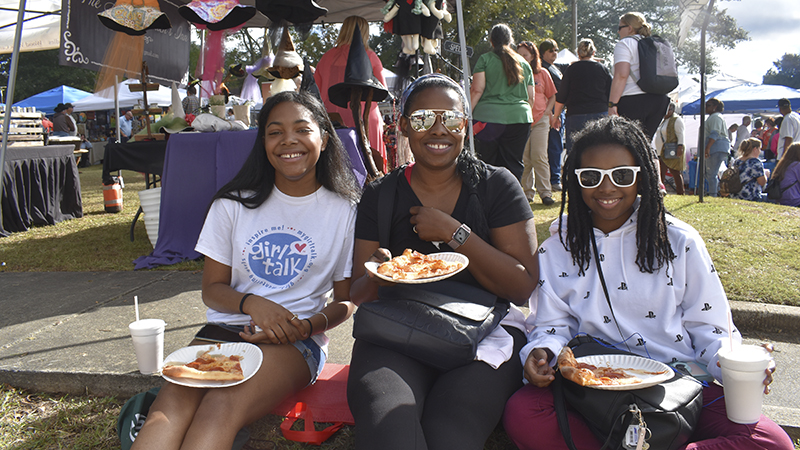 Above, Bemeika, Brooklyn and Makalah Wright pose for a photo at the Hummingbird Festival. (Grace Braswell | Daily News)

The streets of Hogansville were alive with art, music and smiles over the weekend as the 22nd annual Hummingbird Festival was held in the heart of the town.

The Hummingbird Festival is a craft fair featuring several vendors from all across Georgia. From witches hats to freshly squeezed lemonade, there was something for just about everyone to enjoy.

Several business owners in Hogansville used the Hummingbird Festival as a way to gain customers and promote their businesses. One of these business owners was Alex Abraham, who runs a non-profit bike shop named Pedal Forward in downtown Hogansville.

“I’m hoping to spread the word about what we’ve got going on here,” Abraham said.

“There are lots of great people coming through, and the festival is a perfect place to promote our program.”

Many of the vendors at the festival have been attending for years and look forward to setting up and selling their products. Angel Eanes said she has been in attendance at the festival with her handmade witches hats for three years, coming back for the love of meeting new people.

“At the Hummingbird Festival, there are always people to talk to. Sometimes there are repeat customers that come back every year,” Eanes said. “I like to visit this town often. I’m glad I can help to put money back into businesses here.”

The festival has a major economic impact on Hogansville. Several projects have been able to take place, with several others in the making, due to the funds being raised by the Hummingbird Festival.

Some of these projects include renovations of the historic Royal Theatre (currently used as Hogansville’s city hall), the construction of the Tower Trail and an outdoor classroom.

David Milliron, city manager of Hogansville, discussed the importance of the funds being raised by the Hummingbird Festival. The event is the principal fundraising medium for the Hogansville Charitable Trust, which is a non-profit organization that takes charge of improving the city of Hogansville.

“Every year the festival continues to grow,” Milliron saud. “This year, for the first time, all the spaces were sold out for tents. In years to come, we are wanting to move the festival to another location in order to double the size of the festival.”

Stacey Jackson, a native of Hogansville, said that the Hummingbird Festival is one of her favorite events of the year. Jackson said she has been participating in the festival for five years, bringing her family’s Louisiana style of shrimp and grits to the event.