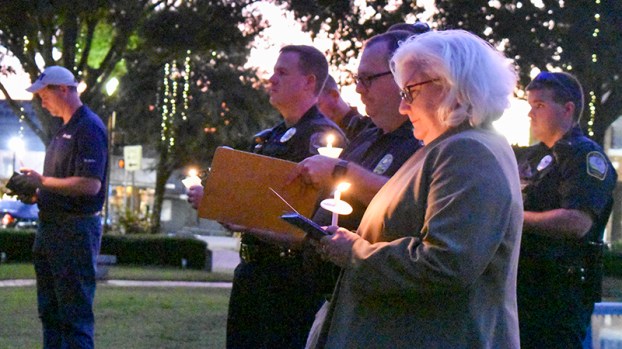 The event remembered the 149 victims of domestic violence who died in Georgia between October 2018 and September 2019, while raising awareness for those trapped in those situations today.

“Domestic violence is a tough conversation,” said Michele Bedingfield, executive director of Harmony House. “It’s not always something pretty, but it is something very important, and it’s important that we remember the 149 victims that lost their life this year due to domestic violence [in Georgia].”

According to statistics shared during the vigil, one in four women and one in seven men are victims of severe physical violence by an intimate partner during their lifetime. Additionally, up to 50 percent of calls to police relate to domestic violence, depending on jurisdiction.

Survivor Melanie Chambers spoke on how easy it is for domestic violence victims to find themselves in situations that they feel like they cannot escape from.

Chambers explained to the crowd how her relationship with her boyfriend had slowly filled her with doubt in her own worth, as he abused her first emotionally and eventually physically.

“The first time it got physical, I was already so emotionally broken and isolated from the people who did love me and care about me that I believed all the negative things that I had been told,” Chambers said. “I believed that no one cared about me. … I thought I deserved to be treated this way. I thought that I had done something that brought this upon myself.”

Chambers said her boyfriend told her that no one would believe her if she spoke out. She said that only fear for her own life had finally convinced her to end the relationship.

However, her ex-boyfriend broke into her apartment after the breakup, and she only escaped by jumping onto the hood of a passing police car following the assault.

Chambers also spoke to the emotional toll that the experience took on her, which lead to alcoholism as a coping mechanism. After a health scare, Chambers said she pushed herself to become healthy, and she stopped drinking and went back to school. As of Tuesday night, she was finishing college with the intention of perusing her master’s degree and had been sober for five years as of February.

“I’m going to pursue my masters in clinical memory in hopes of being able to help someone else and to spread the message and awareness about dating violence and the consequences — the emotional scars that it leaves permanently — but we can all try to heal from together. There are people in our communities and around us that want to help us heal, even strangers that want us to survive and prosper.”

Law enforcement and locals who work with domestic violence victims stood guard over the vigil, and even as the efforts by the Domestic Violence Task Force and law enforcement were acknowledged, attendees were encouraged to continue to work.

“In Melanie’s statement, you heard her say she never thought it would be her,” said Sandra Taylor, the Troup County Solicitor General.

“I’d venture to say most everyone that we see never thought it would be them, and they don’t deserve for it to be them. There’s no rhyme or reason to who are the ones that are the statistics that we see, but what can we do then as a society? I appreciate you being here tonight because what we have to do is if you see something, say something. Catch that officer on the street. Say, ‘I’m concerned about what’s going on here.’ I promise you if you do that, they’re going to ride by, and they’re going to watch. Call 911. Reach out with resources to the people that are in trouble, the ones that are the victims that haven’t been able to break free of it yet.”