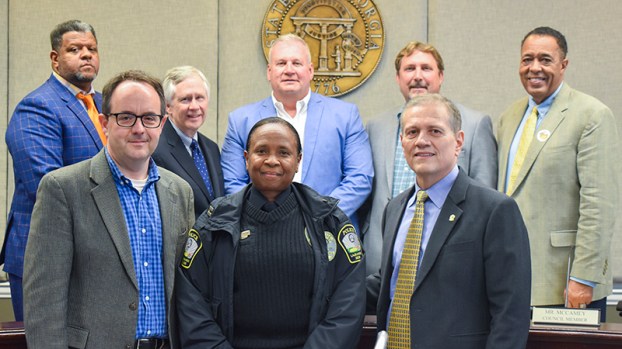 Family and friends traveled from Washington D.C., the Czech Republic, Perry and the LaGrange community on Tuesday to celebrate Captain Andree Robinson’s 35 years of service to the community.

The LaGrange City Council and the LaGrange Police Department recognized Robinson during the city’s regular council meeting, and Mayor Jim Thornton presented her with a 35 year pin.

“She has been a very conscientious and loyal employee of the police department for 35 years, having been hired Aug. 29, 1984, promoted to detective May of 1987, to sergeant in July of 1996, to lieutenant in January of 2005 and captain in August of 2007,” LaGrange Mayor Jim Thornton said. “She exemplifies our basic employment standards by embracing accountability, honesty and integrity. She demonstrates problem solving and sound judgment in discharging her responsibilities, consistently identifies issues or training needs and communicates these through the proper channels to ensure positive change.”

Thornton spoke to Robinson’s willingness to take on additional tasks and projects, while maintaining high standards and a good work-ethic.

“For attendance, she has been exemplary in her 35 years of service,” Thornton said. “Captain Robinson has not had any incidents of sick leave. As a records officer, Captain Robinson processes 150 records requests annually and is always cognizant of documenting and maintaining their responses in compliance with law.”

Robinson also completes first-line supervisor responsibilities, such as personnel hiring, bi-monthly counseling, evaluations and corrective actions in a timely manner. LPD Chief Lou Dekmar said that he has enjoyed working with Robinson and was glad to have seen her success in the department.

“She has been a real pleasure for me to work with,” Dekmar said. “She singularly is responsible for all of our crime reporting. So, the stats the council gets, the stats to go to the GBI, the Uniform Crime report to the FBI – she physically reads every report to make sure that those crimes are scored accurately. In addition to that, she takes care of all the open records request, which in no small part contributes to that reputation of transparency that the police department enjoys, not only with the media but also with citizens.”

Robinson thanked her family and co-workers for their support throughout her career, and she credited them with making her success possible.