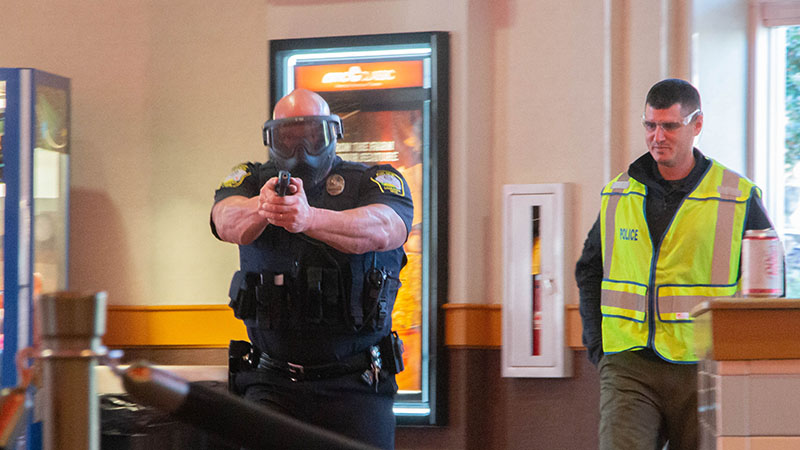 The LaGrange Police Department made this year’s active shooter training as real as possible, with fake blood, flashbangs and dummy rounds.

The LPD spent Monday through Thursday conducting its active shooter training at the movie theatre in downtown LaGrange and at LaGrange College.

“We do training on a quarterly basis and then it kind of culminates at the end of the year, with a more of a live fire-type situation with officers using sim rounds,” said LPD Lt. Strickland. “We chose the movie theater because we’ve been doing it at the school for the past several years, so we’re just trying to find something different, a little bit more realistic. We’ve also got 911 dispatchers in here that we’re using and obviously, it’s important because you never know when or where one of these situations may arise, so it’s important that our officers are prepared to respond.”

“The plan is that the officers that are dispatched are going to respond and neutralize the threat,” Strickland said. “Then their goal is to take care of the victims as quickly as possible. That’s critical because the data out there says that most people bleed out between three and five minutes. It’s critical that we get in, we take care of the threat and start attending to the victims as quickly as possible.”

LPD used staff members as the victims and also community members taking part in the Citizen’s Police Academy. Students going through the cadet program also had a chance to help out in the training as victims.