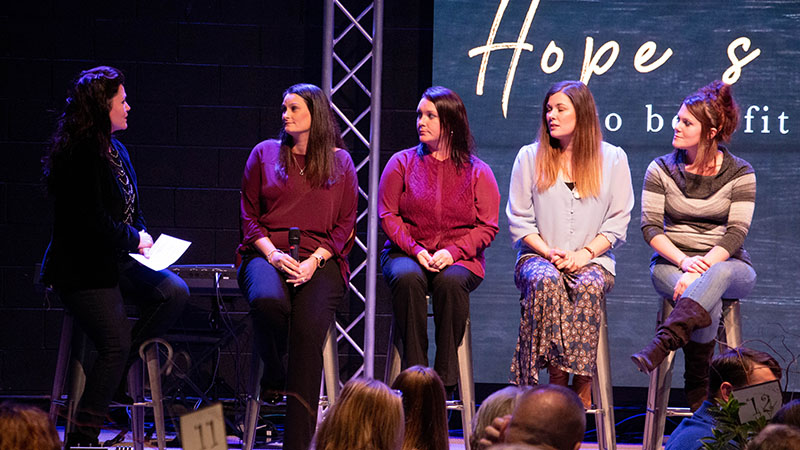 There were tears of celebration Thursday night as four woman took the stage at Southcrest Church to tell about their journey and success from Hope Harbor.

Hope Harbor is a 12-month, residential, faith-based program that serves women who struggle with addiction. It was started 15-years-ago by Dee and Stan Clark. Hope Harbor works with the judicial systems from Troup, Harris and Meriwether counties.

“We are state regulated, but not state funded,” said organizer Kim King. “This event is vital for raising funds.”

King said that when a student first arrives at Hope Harbor, they feel defeated and unworthy of love.

“1 Peter 4:8 says love does what?” King asked the audience. “It covers a multitude of sin and when that love starts flooding her from the top of her head from the bottom of her feet, she looks at that grave, that darkness and says, ‘you should have known my God is still rolling stones.’”

Hope Harbor graduates Shannon Jones, Kelly Camp, Marci Nikirk and Kelly O’Neil all took the stage to speak about their experience in the program.

“It was 2:30 in the morning, and I was in Albany, Georgia, and it was thundering and lightning outside,” O’Neil said, who graduated from the program in 2014. “That’s when I had enough. I was on my knees in the middle of the thunder and lightning, crying and praying. This was something I had never really done.”

O’Neil said that was the night she knew she had to reach out and get help and made the call to go to go Hope Harbor. King asked the group what the biggest struggle was they’ve gone through since graduating from the program.

“Not giving into temptations, especially when it’s so easy when no one’s there watching me,” Jones said, who graduated from the program in 2013. “It is not easy sometimes to just walk away. It is not easy sometimes to say no. But Hope Harbor taught me that I didn’t have to put myself in those positions, either. And that it was okay to walk away if I found myself in those positions.”

Nikirk, who graduated from the program in 2014, said she has had to struggle with fitting in with friends.

“You get back into the world and the world tells you somebody else that you’re supposed to be,” Nikirk said. “What you need to do to fit in and make friends and have relationships. What other people want to do, I can’t just go out and do. I can’t go out and put myself in a situation with drinking and everything, so that’s been my biggest struggle is finding good, like-minded friends and people that will help support me.”

Graduates also discussed their biggest blessings since graduating from the program and becoming sober.

“I work for an aftercare center called Calumet Center, and we take women like Hope Harbor graduates and help them transition back into the community,” said Camp, who graduated from the program in 2011. “We are a faith-based program and I was recently promoted to program director.”

Camp is now working with women, who faced the same struggles she once did and is able to use the tools she learned at Hope Harbor to help other women.

“This is a ministry that’s living up the gospel, and that’s seeing weak women come to the knowledge and the realization of Jesus Christ.” Thrower said. “They see these weak women, but they see something beyond the weakness. They see what the resurrection of Christ is about to do in their lives. Hope Harbor cannot do this without being a Friend of Hope Harbor, without your generous contributions and your donations.”

Thrower’s sister, Shannon, went through the program and successfully graduated from Hope Harbor in March 2012.

“I’m no longer bound by addiction, but that doesn’t mean that life is just butterflies and sunshine and rainbows all the time,” Shannon said. “But, now I have the right tools. Hope Harbor changed my life … and it’s changed many people’s lives, not just our life but family members lives who come in this place. As soon as you drive on this property, you feel the Lord and that is something I miss coming to, because this is just a place of refuge and it’s something I will never forget.”

To learn more about Hope Harbor or to become a Friend of Hope Harbor and give, visit hopeharborga.com/becomeapartner.html or call 706-333-0000.