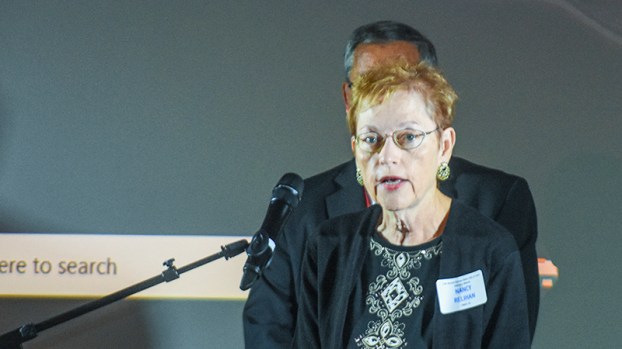 The LaGrange-based Georgia Radio Hall of Fame held its annual induction awards on Saturday night at Great Wolf Lodge, as 19 new members were inducted for their career achievements.

Among the legacy inductees was the late Ray Relihan, the former chief engineer and morning personality for WTRP in LaGrange.

“Dad was the official weatherman Troup County for 25 years,” said Ray’s daughter, Nancy Relihan. “I feel dad has to be pleased tonight that his life’s work in radio communication and cable TV is being recognized.”

Relihan was a veteran of the U.S. Army Air Force and moved to LaGrange to be chief engineer and morning announcer on WTRP. He was known as “The Park Avenue Hillbilly.” He was also chief engineer for LaGrange cable television and developed cable systems in Newnan, Thomaston and Manchester.

“I hope to be a shining light for somebody else who came from a small town in Georgia that didn’t really have all the opportunities that some people have,” Cupit said. “I had a dream and I didn’t give up and I just kept going and, you know, radios been good to me. God’s been good to me. I don’t know why, but I hope I can just keep doing it. So thank you guys so much.”

There were 18 total career achievement candidates with nine of them being inducted on Saturday night.

“I love radio. When God calls my name, I want one of these in my hand,” O’Brian said, clinching tightly on the microphone. “I don’t know how good I am. I know y’all voted me in, so I guess I did something right. Thank you.”

The 2019 Founders and Directors Award was given to Dr. Gene Henssler, who most famously hosted a show named “Money Talks” on WGKA in Atlanta. The Elmo Ellis Spirit Award went to Bob Ketchersid, former news director at WSB and now a co-owner at WYXI in Athens, Tennessee.

LaGrange Has Talent voting is coming to a close on Thursday, Oct. 31.  “We ended up with 23 submissions in... read more