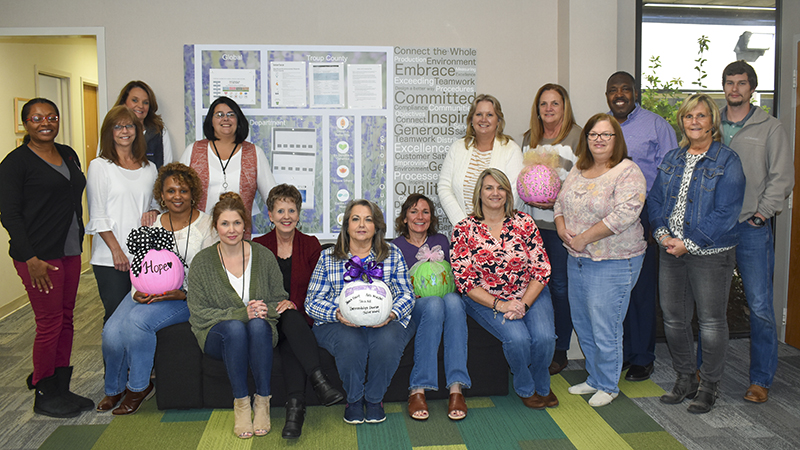 This month, a group of employees from Interface worked together to raise awareness for one of the scariest things locals are likely to face — cancer.

The decorated pumpkins began as a team-building idea and quickly transformed into a chance to raise awareness for different types of cancer. While several types of cancer are represented in the display, the breast cancer displays held an especially important place in participants’ hearts as survivors of the cancer.

“[Our team’s pumpkin] represents breast cancer,” said Tara Hill, from Interface’s finance department. “Myself and Mrs. Sherrondolyn [Dawson] — who is one of the other ladies on my team — we’ve both survived breast cancer. I am a five-year survivor. So, we went with that to represent and give all the other ladies hope because you can survive it.”

Hill said she found out that she had cancer at a routine checkup, and she is thankful for the support of her co-workers, especially in raising awareness.

“It was life changing because you feel like your breasts are taken from you,” Hill said. “This part of being a woman, so it took a little bit for me to get over that, but once I did, I was just glad to be alive. … Having other women to go through that and you know to overcome that is just great to have that support and to let other women know to make sure you go get your checkups, and I tell men too because men can have breast cancer as well. I always say to get your checkups, take care of yourself, pay attention to what your body is telling you. When this something is not quite right, just don’t overlook it.”

Hill’s teammate, Sherrondolyn Dawson, is a nine-year survivor, who was first diagnosed in July 2010. Her diagnosis came after her doctor performed a base mammogram and spotted calcifications. Several months and doctor visits later, a biopsy was performed.

While she has been clear for years, Dawson said that regular screenings are still an important part of her life.

“I finished that [series of radiation treatments in] December 2010, so I’ve been cancer free ever since,” Dawson said. “I still check the right breast yearly and do my own annual, my monthly checks. I’m always feeling. It’s just habit, just always check and make sure and, and go for my mammogram every year.”

Dawson said that she hopes the project brings hope to anyone facing cancer while raising awareness for the importance of screenings.

“I’m here. I’m a testament that you can survive it, so there’s always hope,” Dawson said. “So, that was pretty much why we chose the pumpkin that we did.”

Dawson said that early detection was an important part of her cancer treatment.

“I didn’t have any indications,” Dawson said. “I only did the mammogram, which [is where it] showed up. So, self-exams, mammograms, all of these methods for early detection, better survival rate, less chemo… The earlier you catch it, the better chance of survival.”

Patti Zrazeal, another survivor, likewise agreed on the importance of screenings.

“It’s been 10 years,” Zrazeal said. “I still go every six months for checkup, but that’s my choice. I could go a year. But, I don’t want to go longer than a year. I want to stay at six months. I think a lot can happen in a year’s time.”

Zrazeal said the support of her co-workers on the awareness project is important not only for the women who face breast cancer, but for their loved ones as well.

“When you go through something like this it not only affects you, but it affects the people around you — your family,” Zrazeal said. “Your family is your rock. I know mine was my rock. If it hadn’t been for my family, I wouldn’t have gotten through it.”

Several employees who participated in the project said that it encouraged them to go ahead and take part in cancer screenings, which in some cases they admitted had been put on the backburner.

“Well, it made me go ahead and schedule my mammogram that I was tardy for,” said Birdie Shaw, who helped decorate one of the pumpkins.

The pumpkin decorating contest is far from the only effort by Interface employees to raise awareness for cancer though. Interface employees were among participants in the annual HOPE for a Day walk in September, and employees have also participated in the annual Relay for Life Event at the Chris Joseph Track. The next Relay for Life is already raising funds for the walk on April 17, 2020.