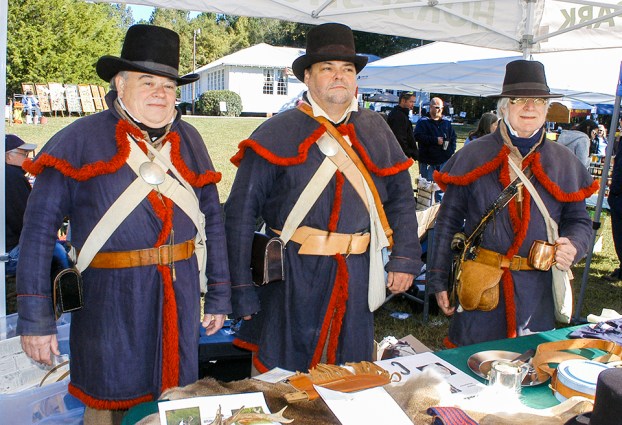 FREDONIA — In its first decade of existence, the Fredonia Heritage Festival has become one of the premier arts and crafts festivals in east Alabama.

That held true on Saturday, as a large crowd of attendees came out despite chilly weather during the morning hours.

The crowd grew in the afternoon hours as the weather warmed up.

People enjoyed browsing among dozens of vendor booths and purchasing unique Christmas gifts for that hard-to-please friend or relative.

A history room was set up inside the Community Clubhouse, and New Hope Foundation President George Barrow talked to visitors about this year’s twin centennials for the clubhouse and the New Hope Rosenwald School.

Both were built and held classes for the first time in 1919.

Barrow showed guests a scale model he’s made of the New Hope School.

He could take off the top and explain interior renovation work that’s been going on inside this classic building.

Long-range plans call for the addition of an extension on the back.

It would be in keeping with the original floor plan for the building and could add a conference room where meetings could take place.

In the main classroom on the left side of the building, Malinda Powers and Jason Williams of the Chattahoochee Valley Historical Society had a booth set up where they sold CVHS books and talked to people about next summer’s bus trip.

In 2020, they will be visiting sites in Alabama relating to Native American history.

On the grounds surrounding the clubhouse, attendees enjoyed live music performed by Fredonia’s own Amber & the Dixieland Bluegrass Band, Wiregrass and featured act, the Lard Bucket Band, a group of talented musicians who have been together for more than 30 years and have performed alongside such greats as Charlie Daniels, Grandpa Jones and Vern Gosdin.

At a tent hosted by Horseshoe Bend National Military Park, visitors could talk to Joe Thompson and Marty Hall of West Point and Ralph Banks of Auburn.

They are reenactors of the 1814 era and frequently have military-style drills and cannon firings at the park.

Visitors could see antique items on display such as old tools, machines, artifacts and old maps.

One display had many types of barbed wire that have been made throughout the years.

Cooperation on the part of the Fredonia Community Club and the Fredonia Heritage Association helped make the event go along without major problems.

Early voting came to an end on Friday, which means voters last chance to take part in the municipal elections... read more