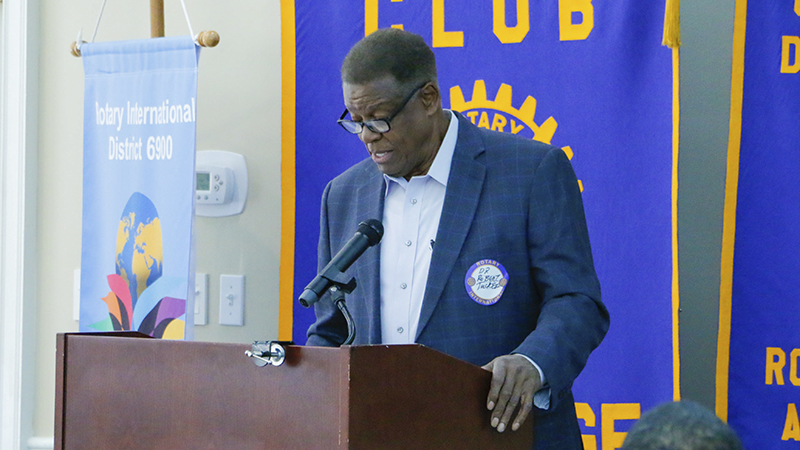 “We are a 100 percent volunteer group, and when I say 100 percent, I mean 100 percent,” Tucker said. “We are really happy with that because our volunteers really want to do it.”

“I believe in LaGrange, these are the best of times,” Tucker said. “Especially, when we look at the progress that we’ve made in relationship building. Today I want to share with you very briefly the beginnings, where we are now and then where we are going to go.”

Tucker said that Calumet had taken safety initiatives in the past that were helpful, added signage to streets for traffic control and educational initiatives within the program.

“Then, a pivotal event occurred within our undeveloped parts,” Tucker said. “Between five and seven individuals were shot … This caused the city and us to redouble our efforts in the revitalization work.”

Tucker presented that based on public input, survey results and technical assessments, four categories were established as areas in which the community would hone in on and evolve from.

“The first is character,” Tucker said. “A lot of time was spent on that because we wanted to maintain the character of the neighborhood.”

The organization is using branding tools to attract businesses who want to provide services and goods to the residents of Calumet Park, as a part of its character revitalization.

“The next is housing,” Tucker said. “Housing is critically important. Improving the existing housing stock is a first priority to a revitalized neighborhood. You cannot revitalize a neighborhood and keep the same appearance.”

He also added that commercial and recreation is a critical part of the framework as well.

A phase of The Thread was originally supposed to be built through the area, but Tucker said it has been put on hold.

“In 2019, we had two incidents where a man was shot in the leg,” Tucker said. “I asked them to pause. We came together and decided to pause until we can get the community on board and get to where it would be put to use. I don’t want to spend that kind of money if you don’t feel safe enough to use it.”

In the meantime, Tucker said they are focused on fixing crime and safety in the area.

“We’re working to do something with that neighborhood, housing, creating more green space in there,” Tucker said. “We hope to get that in the next few months or years, we shall see. But I will not recommend we proceed until we get that done.”

Tucker said they need more volunteers, churches and hard workers helping them with their mission.