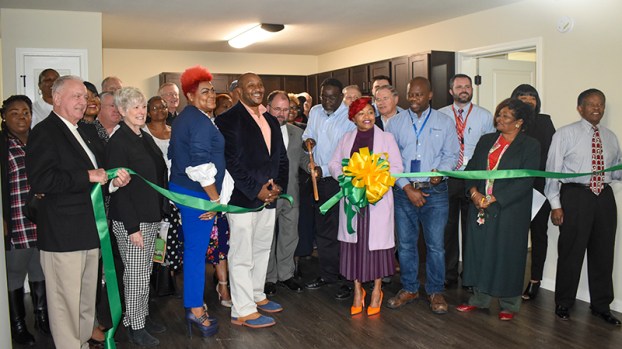 On Wednesday morning, members of law enforcement, the Troup County Homeless Coalition, the LaGrange Housing Authority and community leaders gathered at New Ventures to celebrate the ribbon cutting for The Phoenix South Wing.

The Phoenix South Wing is a model apartment that was built by the LaGrange Housing Authority in order to show what the currently under construction apartments on Whitesville Road will look like once they are complete.

Speakers at the ribbon cutting said they hope the apartments will serve as a stepping stone out of homelessness for people in Troup County.

New Ventures CEO Mike Wilson said he spoke at LaGrange College on Tuesday and was asked why anyone is homeless since the unemployment rate is so low.

“If you make $8 an hour, if you bring in gross $320, and you get maybe $275-$250 to take home and $203 goes to the Stay Lodge, that doesn’t give you a lot of money to live on for the following week,” Wilson said. “So, these are going to give New Ventures and the Homeless Coalition, everybody an opportunity, I think, to utilize this facility. That’s why we’re so thankful to the housing authority for doing this.”

Wilson outlined plans to share the unit as a temporary housing solution and a possible method to help those temporary residents save for a permanent home. LaGrange Housing Authority CEO Zsa Zsa Heard said that the LHA plans to assist New Ventures in determining how residents of the model unit are chosen, and she noted that the unit could allow New Ventures to help fill a need that the LHA cannot.

“We do need emergency housing,” Heard said. “We do need a place for persons that are homeless in our community because we don’t do emergency housing at the housing authority. That’s something that HUD does not allow, so we are elated that we can give this to you, to the community, so that we’re able to do what we’re supposed to do in our community. And it won’t stop here. Maybe this will start something, will create something bigger.”

The apartment unit represents a more than $100,000 investment, and Wilson said that it is part of a continuing partnership with the LHA.

“We are very happy to be continuing our partnership with the LaGrange Housing Authority, and we are so excited about this and the opportunities it is going to give,” Wilson said.

Initially, the idea for the model unit was to show off what LHA’s major remodel will mean for individual apartments.

“We wanted the community to see what our units would actually look like because everybody’s questioning ‘is going to look the same. What is it going to look like?’” Heard said. “We wanted the construction to be beautiful, so we came up with the idea to create this mock unit. We just had to find a building that we could build the mock unit in the inside.”

That building turned out to be inside of New Ventures.

“It was perfect,” Heard said.

“It was already a warming center, but we needed to be able to build this inside of here. So, what you see is a three-bedroom, two-bath unit that is also going to be at Phoenix Landing, the construction that you see on Whitesville Road now. This is what someone’s apartment will look like.”

Even as the LaGrange Housing Authority built the new unit, Heard said there was another important decision that needed to be made — what to do with the unit once it had served its initial purpose.

“Once we build this unit, and we let people see it, and we thought, what can we do with it?” Heard said. “We can’t throw it away, so it was ideal to actually donate this model unit to New Ventures for them to power homeless persons.”

Heard said that the LHA’s relationship with New Ventures began when it installed water heaters at one of the group’s facilities. The LHA also transports people to the warming center, which is hosted in the same New Ventures building as the mock unit was constructed. To learn more about New Ventures, visit Newventures.org.