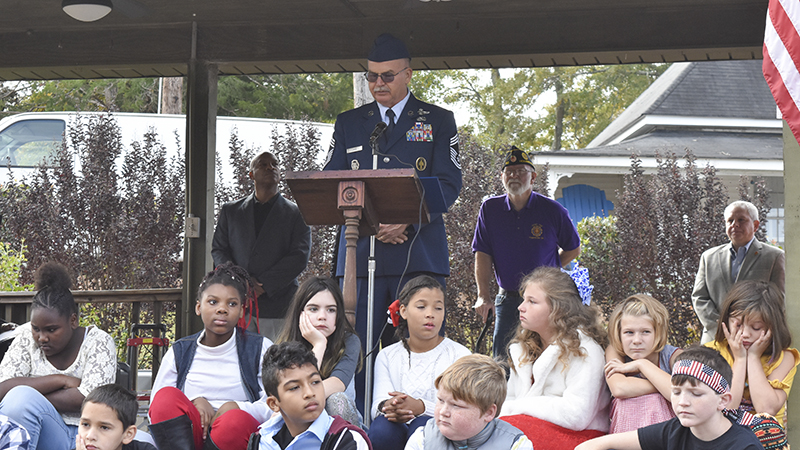 On Monday, Commander Winston L. Braswell Jr. was honored as Hogansville’s Veteran of the Year during the annual Veterans Day program at Calvin Hipp Veterans’ Memorial Park in Hogansville.

Braswell is the commander of American Legion Post 152 in Hogansville, and he used his moment of recognition to encourage more veterans to get involved with the post.

“It means a lot to be a member of the American Legion because they are who lobbies for our benefits in Washington, and all the members we can have help us out,” Braswell said.

“We’d like to have more active people here in Hogansville. We’ve got a lot of projects we would like to do for the veterans in the area, and we could use your help.”

This year, the featured speaker at the event was Callaway High School Air Force Junior ROTC Chief Master Sergeant (Ret.) Arnold Lamb. Lamb spoke on the sacrifices of those in the military and their families.

“I truly believe that the spouses of the veterans that went off to war had the toughest job of all,” Lamb said. “They became the single person that took care of the home, the family and all that entailed. Imagine how they felt when a staff car slowly drove down the street and stopped. Everybody’s heart stopped beating, and they would wonder, ‘is this going to be the notification that no one wanted to get?.’ In closing, I would like to challenge everybody that if you see a veteran and his spouse, please thank the spouse as well for all of the sacrifices that they made.”

George Bailey, a Hogansville city council member and a Desert Storm veteran, led the program for the eleventh year, with the help of other locals who expressed their gratitude to the veterans in attendance.

“It is a privilege for me to stand before you to honor and to pay gratitude to our service members,” Hogansville Mayor Pro-Tem Theresa Strickland said.

“They have continued to make enormous sacrifices to afford us the freedom that we have today. For that, I say thank you to all of our veterans.”

Callaway Elementary School Chorus provided patriotic music at the service, and Callaway High School’s AFJROTC was the color guard at the event.

In addition to the veterans honored at the service, Lamb also recognized Sgt. Billy Joe Maxwell, whose funeral service took place in Hogansville on Saturday.

The Georgia-Alabama Chapter of Quilts of Valor has been operating out of Sewingmachine.com in West Point, but according to information shared during the presentation ceremony, Hometown Quilt Shop in Hogansville will also soon serve as a base for the quilting group.

Quilts of Valor sews quilts to honor U.S. veterans and active duty military personnel for the personal sacrifices that they have made in defending the country.

To learn more about Quilts of Valor, visit Qovf.org.