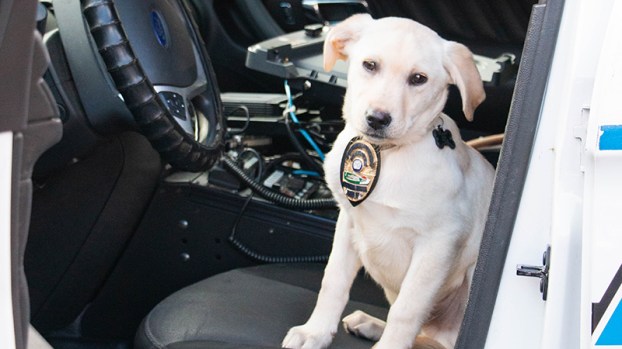 The LaGrange Police Department has a new furry, four-legged recruit on staff.

“Several months ago, Lt. (Eric) Lohr in our training division came to us with the idea of a therapy dog and asked what our thoughts were on having one,” McCoy said. “I got to looking at it and from a community outreach standpoint, a lot of people really love dogs. About at the same time, my little girl and little boy were interested in getting a bigger dog.”

Donut is now being trained to be a therapy K9 for the department. He will be used in schools or senior care programs as a part of their outreach program.

“Our full-service dogs are great dogs, but they are trained to apprehend criminals,” McCoy said. “It’s not always easy to turn that switch off. Donut, on the other hand, is different. If I want to take him into a school, I don’t have to put a muzzle on him, so he can go into the schools, be seen and hang out.”

McCoy said Donut will be especially beneficial in nursing homes.

“You can imagine as you get older, and always had a pet, but you can’t have one in a nursing home,” McCoy said. “We can go by a nursing home and cheer somebody up. Just to see and interact with him and talk to him is great.”

Currently, Donut can sit, stay, and do basic obedience but will go through more heavy therapy training down the road to receive official therapy certification.

McCoy said that the socialization part has been the easy one because everyone in the department stops by to say hey to Donut.

Donut will also assist the LPD with the mental health court, which is one of the many alternative court systems.

The name for Donut derives from the stigma of cops and their love of donuts.

“It’s gender neutral, not offensive, good for the community and at the same time it’s a joke,” McCoy said. “It’s more relaxed and also gets people to laugh.”

Donut was introduced to the LaGrange City Council on Tuesday night, during the city council meeting.

Shoppes on Main, a collection of artistic vendors, had its grand opening on Saturday.   Vendors offered gifts as door... read more