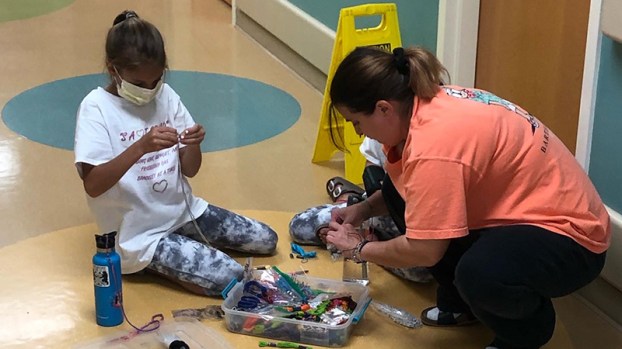 Ten-year-old students at Hollis Hand Elementary are spreading love and friendship and helping hospitalized children overcome a difficult time in their lives.

Recently, students Addyson Yerkes, Audrey Hill and Autumn Patterson started making bracelets for sick children, an idea they came up with on their own.

“They said we want to help kids that are in a hospital, make them bracelets and maybe even go visit them,” said Addyson’s dad Joey Yerkes. “They asked, ‘is that something we could do?’ I said, absolutely.”

Joey said he spent almost two weeks tracking down the right platform that would allow the group to give back to the community. After a few phone calls, Joey was able to touch base with Kelsey Walker, a liaison in the children’s ward at Piedmont Columbus Hospital, to set up a visit.

“She was very receptive and opened the door for the girls to come in and do it,” Joey said. “They took all their gear and their bracelet-making stuff. It was the cutest thing I have ever seen. The first initial visit went so well that Kelsey opened the door to them, and said they could come back anytime they wanted.”

Since then, the three girls have created Strings and Things and recently donated 100 bracelets to be placed in the welcome kits for sick children staying at Piedmont Columbus Hospital.

The group presented a $75 check to Walker on Sunday to supply the kids with items such as treats, birthday cakes, toys and more. Addyson was able to raise the funds by selling and making bracelets at Oakhurst Farms pumpkin patch.

“I was really nervous,” Addyson said. “I was trying to make a lot of money by myself for the charity, and it was really hard. But I was happy to make that much money.”

After donating the money to the hospital, Addyson and Patterson said it felt really good to give back.

“We want to help make the world a better place,” Addyson said.

Joey said he is helping them schedule visits before flu and cold season hits.

“I was so proud the girls and the way they handled themselves,” Joey said.

“The next steps are possibly starting a website and creating a donate tab. Them visiting the patients really hit them where it counts.”

The group plans to try to make more money in the future and has a goal of raising $500 to donate.

“I’ve learned to be nicer than what I used to be,” Patterson said.“I understand more of what they are going through now.”

Anyone interested in buying a bracelet from the group or donating can email Joeyyerkes@yahoo.com for more information.