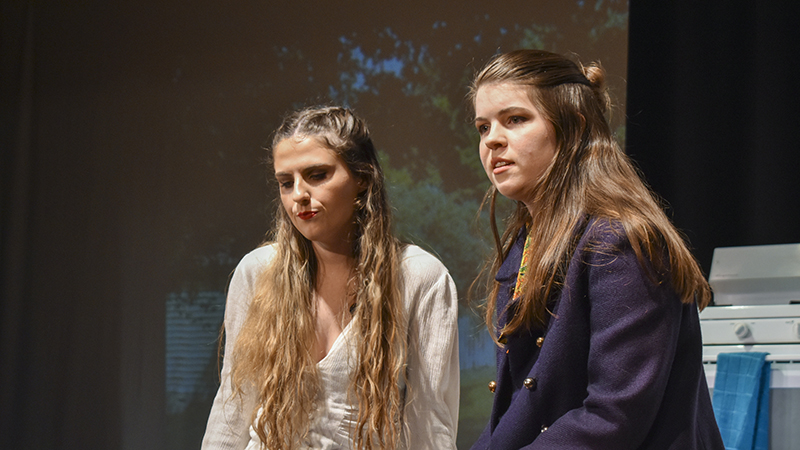 On Thursday night, family drama overtook the Lafayette Theatre Company’s Black Box stage with the performance of Beth Henley’s “Crimes of the Heart.”

The Pulitzer Prize-winning drama follows the MaGrath Sisters as they are reunited in their hometown of Hazelhurst, Mississippi, for the first time in 10 years. Over the course of the play, the sisters must learn to accept the consequences of each of her own crimes.

“If you want to see a show with very pure and raw family dynamics, this is going to be a show you’re going to enjoy,” said Cassie Ellerbee, who plays Chick Boyle. “It is a lot of entertainment through the real, accurate depiction of ugly family matters.”

The relationship between the sisters takes center stage with the production.

“I just really like how this show goes into the sisterly dynamic of three sisters,” said Emily Brooks, who plays Babe Botrelle. “I think that’s really cool to see on stage because I feel like it’s something that isn’t seen on stage as often.”

Brooks is a theater major at Columbus State University, and “Crimes of the Heart” is the first production that she has taken part in with LTC.

Even as the drama unfolds on-stage, the actors said that the play conveys the importance of the sisters finding independence.

“There are a lot of twists, and we’ve been talking about it in the back a lot. It’s a symbol for feminism in general,” said Colby Camp, who plays Barnette Lloyd. “It’s a very feminist, forward play.”

Camp recently performed in the LTC production of “All the Kings Women,” and another returning performer, Jade Talley, expanded on that theme.

“They all go through their own personal journeys — the three sisters do — and I feel like in each of their own ways, they found out they don’t need a man,” said Talley, who plays Lenny MaGrath. “The only thing they really need is each other.”

Talley previously appeared in the LTC production of “Grease.”

The LTC performance of “Crimes of the Heart” features a six-person cast of young adult performers.

“The characters are all under 30-years-old — between 20 and 30 — and my cast is in that range too,” Director Molly Fitzsimmons said. “That’s been fun and a challenge too because we have some fairly inexperienced people in the cast, so we are working hard, and that is a challenge and fun.”

For many of the cast members, the performance has meant growing along with their characters.

“At first, I was doubting myself because this was my first actual play and everything,” Talley said. “So, I was doubting that I could learn the lines, sometimes when I would stumble and still have my script with me, and I had to really kind of be like [my character, Lenny,] and be like, I can do it. … Like, you got this girl.”

“Crimes of the Heart” will be performed in the LTC Black Box Picnic Theatre at 214 Bull Street in LaGrange on Nov. 15, 16, 21, 22 and 23 at 7:30 p.m. There will also be a performance on Sunday, Nov. 17 at 3 p.m. Tickets cost $17 for adults and $12 for students ages 18 and under. The show is picnic-approved, and the theater opens one hour before the performance. Concessions will be available at the show.

For more information or to purchase tickets, visit Lsparts.org, email info@lsparts.org or call (706) 882-9909.