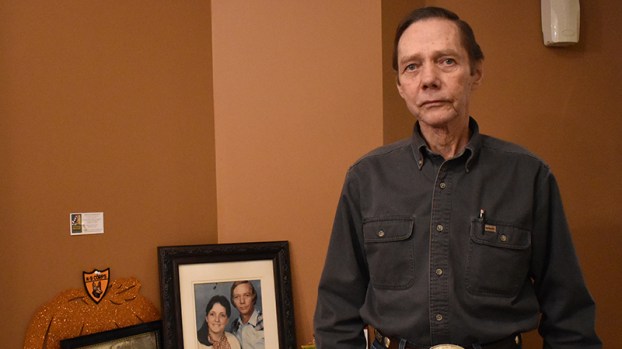 Cyree was part of the Honor Bus Tour hosted by Batson-Cook Construction in early November. The tour treated local veterans and their guests to a free, all-day tour of the museum. Cyree is a veteran of the Vietnam War, where he was a dog handler in the U.S. Army.

Tiffany Hoffmann, assistant director of education and tour coordinator for the museum, has been collecting stories of dog handlers for a K9 exhibition. When Cyree came to visit, she said she knew they had to talk with him. The museum will be recording him soon, according to Hoffman. Originally, Cyree was in paratrooper school but when he found out about the dog handlers, he volunteered.

Cyree said he can still remember sitting with his first dog, on the steps of his childhood home in Columbus.

“It grows in your heart,” he said of his love for dogs.

Cyree began training at Fort Benning with his army dog, Stryker, a full-blooded German Shepherd. When they weren’t training, they were down on the Chattahoochee River, where Cyree had played and visited as a kid. From Fort Benning, the dog and his handler left for Vietnam.

“They shipped everything over there — crates, dogs, people,” Cyree  said. “Then from Saigon, we went to smaller towns.”

Sometimes when Stryker got tired, Cyree would take another dog.

“They would switch [the dogs] out if they were worn out, so I would volunteer to go back out. I was young and wanted to be saving lives,” he said. “I wanted to protect the dog, too. I didn’t want anyone else to have him.”

Cyree was with another dog when he was shot, taking three bullet wounds.

He said the dog was shot and jumped onto Cyree in shock. Both healed from their wounds in Saigon and went back to the jungle. Stryker was waiting for Cyree when he got back. He remained very protective of his handler.

“He wouldn’t let anyone near you,” Cyree said.

Not even the army chaplain, apparently.

“The preacher would be trying to get us to service, and he would throw little rocks to wake me up because he knew better than to go in on that dog.”

On patrol with Stryker, the dog was Cyree’s first line of defense.

“It was educational. You learned from people, but mostly from the dog,” Cyree said. “They don’t lie. They’ll let you know. Just because they have four legs and bark don’t mean they’re not smart.”

The dogs would detect venomous snakes and spiders, as well find human enemies. The Vietcong soldiers would hide in small tunnels along the road, so the dogs would run them out to the other side of a tunnel, where American soldiers were waiting for them. Cyree’s trust with Stryker was so strong that he could take him off the leash and let him go search. Even off the leash, the dog knew where his handler was.

“He would always be watching me. If he could see or smell me, he was OK,” Cyree said.

He was with Stryker three years when the Army put Cyree on a plane back to the United States. None of the handlers knew until they were on the way back that their dogs, their companions in battle, were not coming back with them. They were being put down.

“The guy in charge of the kennels, they made him put them to sleep, then he had to dig a hole,” Cyree said.

It was army policy back then, according to Cyree. He said hat loss affects him as if it were yesterday.

“Your life is depending on him. You eat and sleep with him, fly with him,” he said of Stryker. “I can’t get it out of my mind. It won’t leave you.”

After Vietnam, he met his wife Marie, the other love of his life.

“We were just young’ins,” he said. “We camped on the riverbank and cooked.”

“Oh, we had five or six dogs. People would give them to us because I loved animals and, she did, too,” he said.

Four years ago, Marie died of a heart attack. They were married 42 years. Even their tombstones have engravings of dogs.

Now settled in LaGrange, Cyree’s only animals are the birds out the window.

“If animals get up, you better move. You can trust in them. They don’t lie,” he said.

Cyree will be telling his war stories of being a K9 handler to the Infantry Museum. The recordings are part of an ongoing effort to preserve the history of this vital part of military history. Military K9s are still on the job, sniffing out bombs and contraband, according to Military.com. The dogs are no longer left behind in war zones, but they still may get injured alongside their handlers. The National Infantry Museum is bringing in a temporary art exhibit next spring that highlights these soldiers and their dogs.

“The Wounded Warrior Dogs Project is a traveling exhibition of wooden dog sculptures created by master Ohio craftsman James Mellick,” said Assistant Director Hoffman. “The dogs are intended to be symbolic of the sacrifice and exhibit the same wounds as their human companions in battle. The installation of wounded and rehabilitated dogs intends to raise awareness and focus the attention on the sacrifice and needs of wounded veterans.”

Mellick will also be creating a K9 commissioned piece that will stay permanently at the museum. To learn more about the exhibits, contact at (706) 685-5814 or email her at NIFEducation@nationalinfantryfoundation.org. Donations toward the exhibits can be made to the National Infantry Foundation, C/O Tiffany Hoffmann, 1775 Legacy Way Ste 220, Columbus, Ga 31903.

Light up LaGrange Christmas parade to be held Nov. 22

It’s beginning to look a lot like Christmas, and on Nov. 22, festivities will really get underway with the second... read more