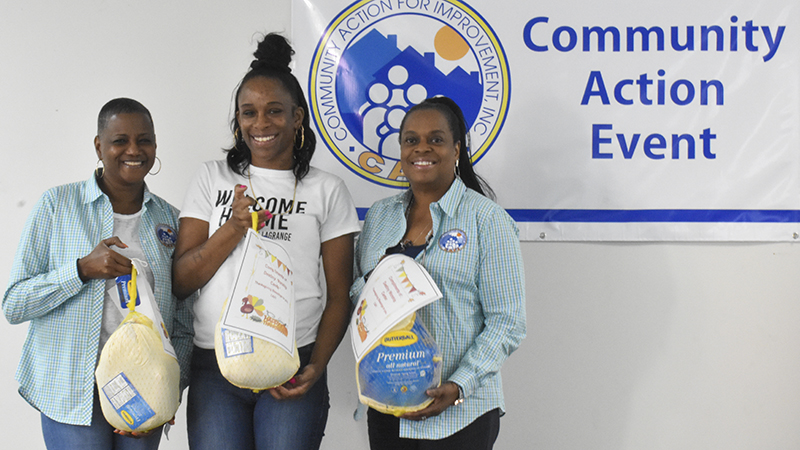 On Monday morning, 30 community members were given another reason to be thankful on the upcoming holiday when they were given turkey and ham at a giveaway event at Community Action For Improvement.

The Thanksgiving dinner dishes were given out to people in need by reservation only.

“I just wanted to give back to the community, so I came up with this event with the turkeys and hams to give away to people who can’t afford them,” said Ericia Smith, who organized the turkey drive for CAFI.

Smith said she received a lot of support from her church in preparing for the event. She said Destiny Church donated 11 hams, and the giveaway also received a donation from Twin Fountains. The recipients of the hams and turkeys were selected by CAFI.

Smith said that she knew many people struggled to afford turkey or ham for their Thanksgiving meals.

“I heard a lot of people saying they couldn’t afford it,” Smith said. “It just dawned on me — maybe I should try to do this and give back. I set my goal 30 turkeys and hams, and I met my goal.”

For Smith though, the giveaway’s significance went beyond simply selecting a charity at random, since CAFI helped cover her power bill earlier in the year when she was struggling.

CAFI Representative Candance Ford said she was thankful for Smith and that events like the giveaway on Monday are the reason why CAFI exists.

“It was just a God-send that Ericia, who is a former client, wanted to give back,” Ford said. “At this time of year, it is a God-send. We are happy to help in any way we can.”

Arrest made in seven automotive break-ins