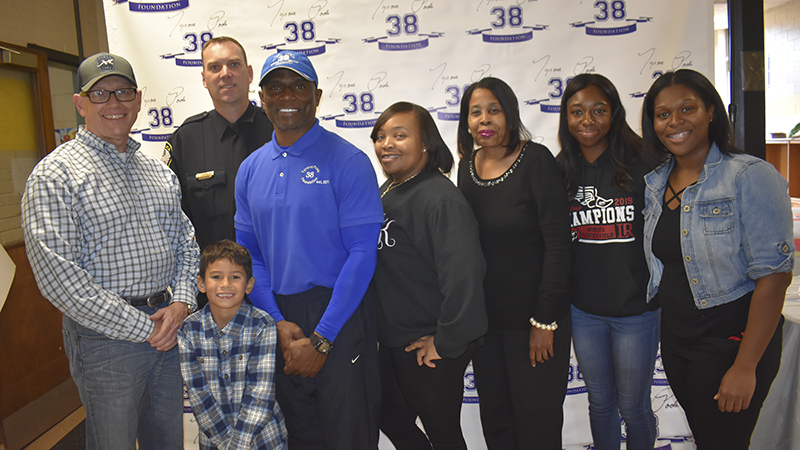 It was an impactful homecoming for Tyrone Poole.

Poole, who played in the NFL for 14 seasons and won two Super Bowl championships with the New England Patriots, grew up in Troup County, and he graduated from LaGrange High in 1991 before playing football at Fort Valley State for four seasons.

Poole’s journey then continued in the NFL, and he enjoyed a phenomenal career, highlighted by the two championships he won as a defensive back with the New England Patriots.

While Poole has gone on to enjoy immense success on the field and off since leaving LaGrange, his hometown is never far from mind.

Poole, who lives in the Atlanta area, returns home often to visit, and on Sunday afternoon, he was at one of his former schools to do something kind for members of the community.

Poole, through his 38 Foundation, participated in a turkey give-away at the former Cannon Street Elementary School.

Poole and his support staff not only gave away 50 turkeys but also the sides that will help families enjoy a full Thanksgiving feast.

“I know what it’s like for people to struggle, so I feel like anytime I have the ability to, I have to give back in any kind of capacity, mentally, spiritually, whatever it is, give back and help the next person,” Poole said. “And that person being helped can help somebody. That’s how we keep everybody in abundant life.”

Among those assisting Poole on Sunday was his daughter, Tyra, who is a member of the track and field team at Lenoir-Rhyne University in North Carolina.

Poole was grateful to be able to share the experience with his daughter, and also give her a glimpse into his life as a youth growing up in LaGrange.

“I was telling my daughter Tyra, I went to elementary school here,” Poole said.

“Walking in, it kind of brought back memories when I walked past the play area back there. To actually give back, to where I grew up, is just awesome.”

Poole, who also has a son who will begin high school this fall, involves his children in his charitable undertakings as often as possible.

“By me showing them, I pass the baton, and let them know they need to do their duty, to give back,” Poole said.

Sunday’s event had been in the planning stage for months, and Poole wasn’t sure what the response would be.

He got his answer when he arrived at the school to find folks already waiting, and the 50 turkeys went quickly.

“Now, they can use that money for their daughter or their son,” Poole said.

“Maybe somebody needs that $10. You never know what somebody can use to get over the hump.”

Poole plans on making this an annual event, and in 2020 he’ll up the number of turkeys given away, and he hopes to see more young people in attendance.

“We’re talking about passing the baton, so I said when I hold the turkey give-away, I’m going to ask the parents to bring their kids,” Poole said.

“The purpose is giving back. All we had here today were adults. This hit me in my spirit. Next year have the parents bring the kids, so they can see.”

Katie Mercer Van Schoor, the marketing/communications manager for the City of LaGrange, said Poole will always have the backing of the city.

“The city’s 100 percent behind him, and we will support him in any way that he needs,” she said.