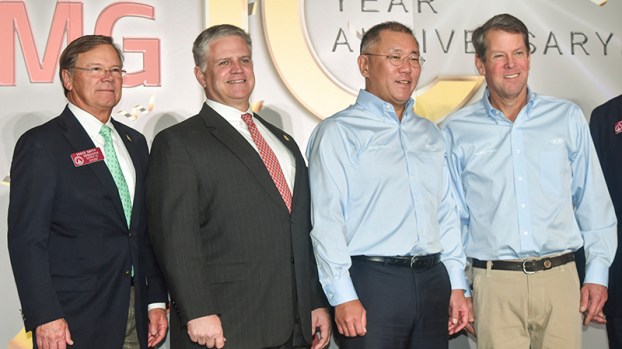 WEST POINT — On Nov. 16, 2009, Kia Motors Manufacturing Georgia rolled its first 2011 Sorento CUV off the production line to signify the plant was open for production.

Ten years later, the company in West Point has been the center of a Super Bowl commercial, produced 3 million vehicles and employed thousands of people in the Troup County and Chambers County region.

U.S. Senators Johnny Isakson and David Perdue could not attend but did send in a statement by way of a letter and a video package.

“Today marks a decade of achievements for KMMG that we can all be proud of,” Miller said.

Kemp said Kia is a facility that has put Georgia on the automotive industry map.

“I’m also glad that there are over 3,000 hard-working Georgians that are employed here now,” he said. “I know that the effect on the community is much, much more than that.”

Kemp said the positive impact of Kia hasn’t just helped West Point but helped lead the way for Georgia to be at the forefront of the national automotive sector. He said the state now has more than 300 auto-related factories in Georgia and in the past five years, the state has located more than 100 automotive companies, creating about 9,000 jobs.

“That’s because of this facility,” Kemp said.

The governor also touted the university and technical college systems in the state and workforce training program like Georgia Quick Start, which was instrumental in building a fast pool of hirable employees for Kia 10 years ago.

He said he wanted to reiterate this gratitude for Kia’s continued investment in Georgia.

“With an incredible partner like Kia by our side, it is certain that our future is bright,” Kemp said. “Together, we can ensure that Georgia remains the best state in the country to live, work and raise our families, but also to do business.”

Euisun Chung, executive vice chairman of KMMG, started his speech by thanking the U.S. Coast Guard for its involvement in saving a capsized Hyundai Glove cargo vessel, trapping for men alive in September.

All the men were saved and Chung presented Captain John Reed of the U.S. Coast Guard with an award for his leadership.

Chung also thanked the local leaders for their insight and counsel when Kia first moved to the area. Then, he moved to the future of Kia, saying it will continue to be a company about the customer.

“We will be more customer-oriented because that’s the most sensible business strategy, and we will also be more closely aligned to communities and accelerate human progress everywhere,” Chung said. “This is not because we are forced by anyone, but because we want to be sustainable and contribute to global sustainable development.”

Stuart Countess, KMMG’s chief operating officer, also talked about the future, saying the automotive industry has been historically focused on manufacturing sales and the internal combustion engine. However, he said today the industry is experiencing a change in technological advancements and shifting toward being a mobility services provider.

“This means customers are moving away from an ownership experience to a ride-sharing experience,” he said.

Countess also said Kia is seeing changes in consumer trends such as the North American market shifting from the sedan-style vehicle to the SUV model.

Ferguson, who was the West Point mayor when Kia opened its facility, said West Point was living in a time of fear and despair of economic uncertainty before Kia.

“Countless lives have been transformed,” he said. “We are now living in a shared moment of prosperity. And we all have a shared vision of a brighter future for not only West Point, Georgia, Troup County and in our state, but also our nation.”

He said moving forward, there has to be continued trust and faith to confront the upcoming challenges another decade may hold for the region.

“We know that is our responsibility to accept the challenge, and that challenge is for the next decade to be better and brighter than before,” Ferguson said. “I don’t think that there’s a community anywhere in this country that will shine under that challenge as much as this one.”

It was an impactful homecoming for Tyrone Poole. Poole, who played in the NFL for 14 seasons and won two... read more