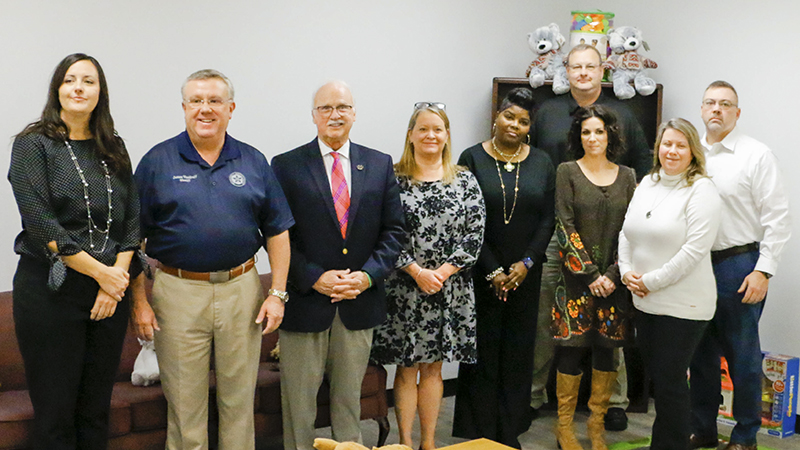 Children in the care of the Division of Family and Children Services (DFCS) will now have a designated safe place to spend time with their parents incarcerated at the Troup County Jail.

“It is primarily for the child,” said Troup County Judge Michael Key. “Children separated from their parents by state action … Oftentimes, the children have no idea what is going on. The only visitation we have is by video conferencing, and that’s not good for the children.”

Key said the court system learned it was unhealthy for the children to see their parents, but not touch them, so they typically did not allow it at all.

“It’s not just the parent’s right to see their child, but the child’s right to visit their parents,” Key said.

An old courtroom at the jail was transformed completely during the weekend with new floors, fresh paint and furniture to create a warm, safe environment for the child visiting their parent.

“Some people might say, ‘well, they are in jail why should they see their kids?’” said Troup County Sheriff James Woodruff.

Every Tuesday, children will have the chance to visit for an hour time period with their parents, under supervision of an officer and counselor, or DFCS parent aid.

“We have parent aids in place to make sure it’s a smooth visit, and the kids feel comfortable and safe,” said West Georgia Counseling and Assessment Services Andrea Malone. “For some of our older kids, we are going to have counselors involved to make sure kids are prepared for their visit.”

Within just a few weeks of the idea being put in the place, the sheriff’s office was able to accommodate the court systems and DFCS’s wants and needs for the room, including safety.

“My chief deputy, Jon Whitney, has been very instrumental in putting together the standardized operating procedure and focused on the safety,” Woodruff said. “Jail commander Marty Reeves will head up moving the inmates in and out and making that fluid. I’m proud to be a part of it.”

Children will be transported to the jail through DFCS or West Georgia Counseling and Assessment Services transporters. Malone said it is the same as what they do through their offices, just now at the jail.

“It may add visits that a child may never had gotten in the first place,” Malone said.

The sheriff’s office will also have criteria as well on if a parent can visit with their child but said it will be a case-to-case basis.

“If it one of the was a seven deadly [charges], we won’t allow them or if it is someone who causes a lot of trouble in the back,” Whitney said.

The collective efforts of TCSO, the juvenile court, DFCS, West Georgia Counseling and Assessment, Georgia’s Court Appointed Special Advocates and others made it possible for a child to see their parent for the first time in approximately seven months Tuesday afternoon.