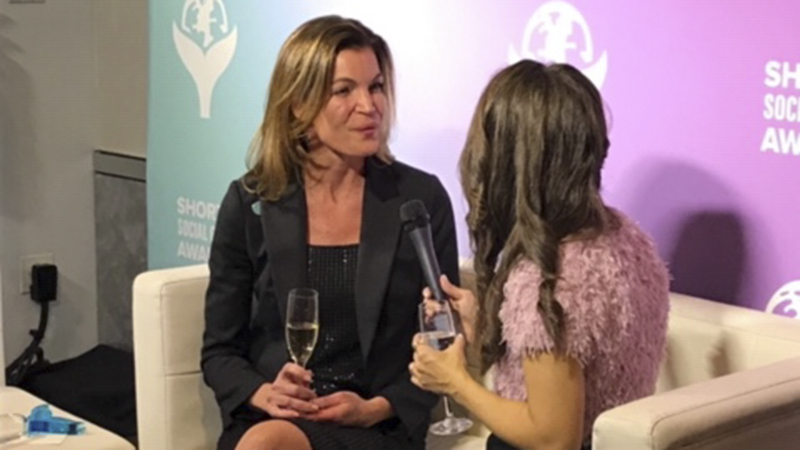 On Thursday night, The Ray was announced as the winner of the Energy Award at the fourth annual Shorty Social Good Awards.

The Ray is the 18-mile stretch of road that extends from LaGrange to the Alabama state line, where technologies and innovations are being installed with a goal of creating a zero-carbon, zero waste and zero death stretch of highway. The Shorty Awards is a program created to raise global awareness around brands, agencies and nonprofits that have a positive impact on society.

“It is so exciting to be recognized for Best in Energy because some of the things that we feel so passionately about at The Ray are at the intersection of transportation and the energy sector, and that is what the Shorty Award is,” said Anna Cullen, director of external relations for The Ray. “It is showing the world just how critical that intersection is. There is so much potential that we are unlocking at The Ray for renewable energy in the transportation sector.”

The Ray was founded in honor of Ray C. Anderson, the founder and chairman of Interface Inc., who was known during his lifetime as the world’s greenest CEO. The projects on The Ray have aimed to continue his legacy of sustainability.

“The Shorty Awards honor organizations that make the world a better place. What better recognition could The Ray ask for?” said Harriet Anderson Langford, founder and president of The Ray. “My father’s legacy is to take on climate change fearlessly and that’s what we’ve tried to do every day at The Ray. To me, ‘Best in Energy’ is the recognition that our transportation sector is not a liability, but an incredible asset that we are just beginning to unlock.”

According to the Shorty Awards website, The Ray was selected because of the projects already in the ground, and The Ray’s potential to have its success replicated in other states.

“There are a lot of people who are talking, and there are a lot of people who are thinking, but what makes The Ray different is we are doing,” Cullen said. “We are building. We are forming such unique partnerships. Our new charter that was signed this year with the Georgia Department of Transportation and Federal Highway Administration really sets us apart and creates the unique public, private philanthropic partnerships that enable these real-world demonstrations in an environment that can be paralyzing for so many other people. We found a way to build and do and innovate, so I think we are really unique in that way.”

Cullen said that partnerships with different groups has propelled The Ray forward and made many first-of-their-kind projects possible.

“I think the partnerships are absolutely critical because we are the partnerships,” Cullen said. “The Ray is the sum of all of the things put together, and so when you look at where we are today and where we want to be in 2020 and in 2025, I think those partnerships will grow and strengthen and multiply.”

So far, The Ray has installed a solar-powered vehicle charging station, a tire safety check station and solar paved road at the Welcome Center near the state line. Smart plantings of annual wheat grasses that enrich the soil, retain clean water and sequester carbon are also in place on The Ray, and bioswales, which slow water movement and captures pollutants during rainstorms, also now decorate the stretch of highway. These efforts are in addition to pollinator gardens, climate modeling efforts and a partnership with Troup County to install the first rubberized asphalt road on Tom Hall Parkway.

However, those efforts are just the beginning, and Cullen said to look forward to major innovations on The Ray.

“You’ll see some more renewable energy demonstrations,” Cullen said. “We are looking to do a wind pilot in the future. We are very passionate about working to put the smart road dot out into the world, so the public can see [it]. It is a technology that we’ve actually developed, and we own the intellectual property for The Ray itself.”

Cullen said that the introduction of autonomous vehicles is also expected to be tested on The Ray. The biggest change will likely carry on outside of Troup County, as The Ray hopes to see other areas adopt the technology that has proven effective on The Ray.

“Something that you will see more of in the future is scaling, is seeing it exported out of The Ray itself — between West Point and LaGrange — and into the world,” Cullen said. “All of these states will be looking to The Ray and Georgia as a guide for how to build out their future infrastructure and their highways.”

The Ray was also selected earlier this month for Newsweek’s Top 100 Smart City Partner Momentum Award, and on Monday, Atlanta Magazine recognized The Ray with a Groundbreaker Award for Transportation. The Ray was featured on the Weather Channel’s “Top 10 Ways to Save the World” in 2017, and it was a finalist for Fast Company’s World Changing Ideas Award.

To learn more about The Ray, visit Theray.org.