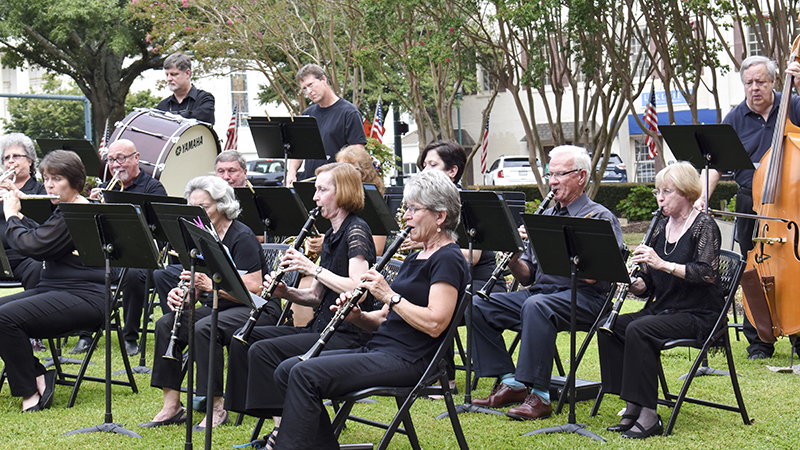 The LaGrange Community Band is warming up its instruments for its first ever Christmas concert on Dec. 17.

The band has been playing at LaGrange’s Fourth of July Concerts for about 10 years, but it only became a full-time band in the last year, performing at a spring concert with the LaGrange College Band, the annual patriotic concert, a ceremony honoring Lafayette and now, the holiday concert, this year.

“We were created for that purpose just to play the patriotic program before the Fourth of July. That’s why we were created, but this year, we became a full-time community band,” Band Director Neal Brumbeloe said. “This is our first holiday concert because it is the first December we’ve been together as a full-time band.”

Brumbeloe said the band keeps him busy, and members begin practicing pieces months before each concert, which he said is a big change from his years as a high school band director.

“I am constantly listening to music out there, trying to find arrangements for us to play,” Brumbeloe said. “So, I’m busy many hours out of every week just trying to be prepared for the next event we have coming up.”

The band got its start in 2010, when the Downtown LaGrange Development Authority requested that a group perform at a patriotic concert in honor of the Fourth of July. Brumbeloe gathered a group of mostly First Baptist Church members to perform at the concert, and the band has continued with 130 musicians participating over the years. An average of 50 performers have played at the annual Fourth of July concert. During those early years, the band met just once a month to practice, but now that it is performing more often, it is also meeting more often for practices.

“It is a transition to get people to come and commit to a time, but that’s a challenge for Neal to try to pull together a concert with just two rehearsals a month,” said Laurie Searle, board member and clarinetist for the band.

Brumbeloe said it was a challenge that he was prepared for, and with a list of some his Christmas favorites on the performance list, he is excited about the band’s Christmas concert.

“Christmas is my favorite time for music,” Brumbeloe said. “I just love Christmas music, so I got to pick all my favorites to put in this concert for the very first one. I’m really looking forward to it. The band really plays well. … It’s just a real thrill for me to conduct a group like this and play music that I personally selected and love listening to.”

The band will perform “The Sounds of Christmas” at First Baptist Church’s New Life Building at 7 p.m.  on Dec. 17. The performance is free and open to the public. To learn more about the LaGrange Community Band, visit Lagrangecommunityband.org.