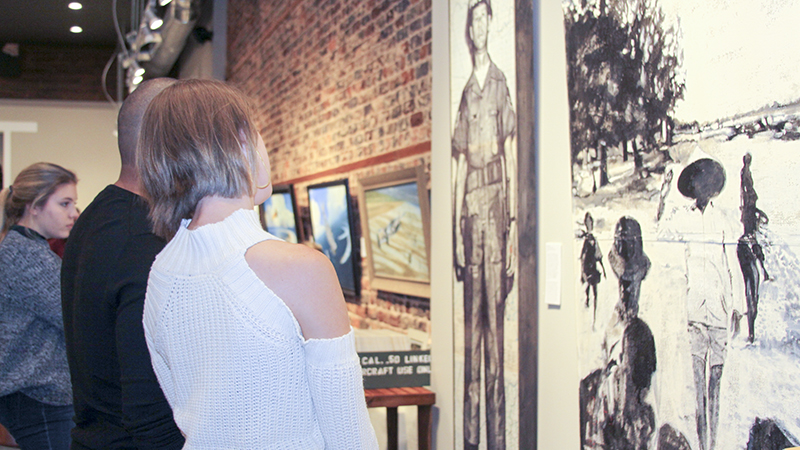 The Suffering Artist in Hogansville will once again host its annual salute to veterans on Saturday at 6 p.m. at the opening of “The Ashes of His Fathers: Art Dedicated to Veterans.”

The fourth annual veterans’ art show opening will once again be held on the same night as the Hogansville Sip ‘n’ Shop and will honor those who have served our country over the years.

Chris Swanson of The Suffering Artist said there is a lot of great art in this year’s show, but the highlight of the show will be a portrait of Sgt. Billy Joe Maxwell, which will be presented to his family. Maxwell was a soldier from Hogansville who was killed in the Battle of Chosin Reservoir during the Korean War. Maxwell’s remains were only recently recovered, and he was buried in Hogansville earlier this month.

“One of the local artists drew a portrait of that soldier, and Saturday night, she’s going to present it to his surviving family members with the mayor there,” Swanson said. “We’re going to present it to the family that night and say a few words about what an honor it was to get his remains back and buried here in his hometown. So, I think that’s going to be our big, exciting thing this year.”

The artist, Mary Fields, is an active member of the local arts community, and her work has previously been displayed at The Suffering Artist and the LaGrange Art Museum, among other venues. The portrait will show him as his family remembered him for the decades that he was missing — based on a photo.

“It’s his serviceman’s portrait based on a photograph of him when he enlisted,” Swanson said.

The presentation should begin at 6:45 p.m., and anyone hoping to attend is encouraged to arrive early.

The annual veterans art show began with an idea of hosting an exhibit of military aircraft nose art, but with more local artists hoping to honor veterans than there was available nose art, it soon became a tribute to veterans.

“We decided to give artists a chance to pay tribute to veterans,” Swanson said. “It’s been a really, really good show. Every year seems to get better.”

The gallery is usually full of visitors during the opening of previous veterans exhibits, and Swanson said the veterans’ art show is often one of The Suffering Artist’s best-attended shows of the year.

“I think it is a cause people naturally like, and it draws in people who may not even normally come to art exhibits,” Swanson said.

The exhibit will be on display at The Suffering Artist at 311 East Main Street in Hogansville through the New Year. The gallery is open on Saturdays from 11 a.m. until 4 p.m. For more information, visit Thesufferingartist.com.

Viewings can also be made by appointment.