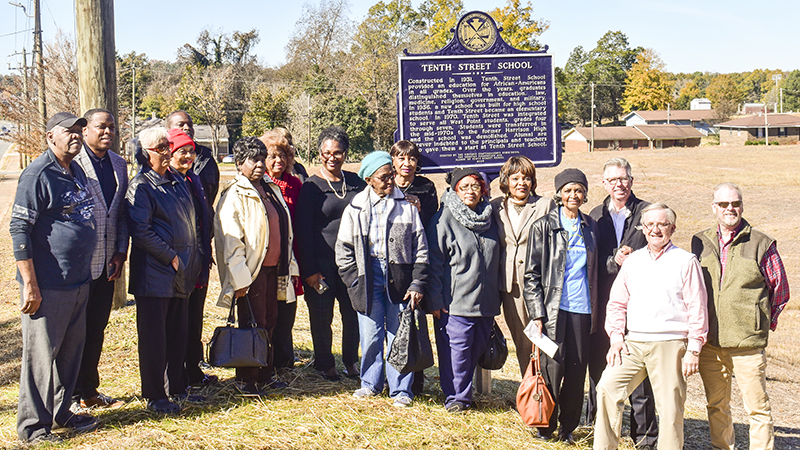 WEST POINT — A historical marker to memorialize a longtime school in West Point was put back in place Wednesday afternoon by the West Point City Council.

The historical marker for Tenth Street School is once again standing strong along 10th Street in West Point between Avenues H and K. The marker used to be in the field next to the Bethlehem Baptist Church. However, when the city took control of the land and cleared it for a potential sale of the property, the sign had to be taken down.

“I always like driving down 10th Street and seeing the marker, and I was sad to see it go, like I’m sure you all were,” West Point Mayor Steve Tramell said to a small crowd Wednesday by the new sign. “I am very happy to see it back today.”

The inscription on the marker said Tenth Street School was constructed in 1931, and it provided an education for all African-Americans in all grades.

“Over the years, graduates distinguished themselves in education, law, medicine, religion, government and military,” the sign reads.

The inscription also says in 1956, a new school was built for high school students and Tenth Street School became an elementary school. In 1970, the school was integrated to serve all students in West Point for grades four through seven. However, students were transferred to the former Harrison High School in the mid-1970s, and the school was demolished.

“Alumni are forever indebted to the principals and teachers who gave them a start at Tenth Street School,” the marker reads.

Tramell said the Julius Rosenwald Fund paid for the original school, and the building had a price tag of a little more than $20,000. It was made of brick veneer and was one story with a basement, eight classrooms, steam heat, electric lights and running water.

He said the school initially had a principal, seven teachers and served students in first grade through 11th grade. He said the class sizes were small and the graduating class of 1936 had only three students.

“May this marker stand to remind all of those that sacrificed to make the Tenth Street School possible and to those that have gone on to make significant contributions to society as a whole,” Tramell said.

The original marker was placed by the Historic Chattahoochee Commission, the Charter Foundation and alumni of Tenth Street School in June 2004.

Councilwoman Deedee Williams attended the school before it was demolished.

“It brings back very fond memories standing here,” she said. “Many a day, I walked here from home about two blocks away.”

Williams said there were many great teachers — some still living in the area — who taught at Tenth Street School, and the marker was a great way to remember the significance of the site.

“Unfortunately, the building is no longer here, but let us not forget where many of us in West Point got our foundation,” she said.