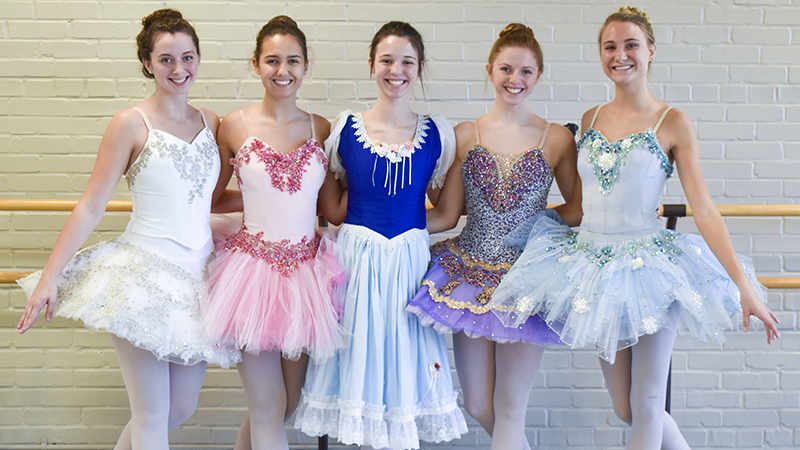 A Christmas tradition will take the stage in LaGrange for the 36th year when the Lafayette Ballet Company performs “The Nutcracker.”

This year five senior dancers, who have been performing with LTC for years, will perform in the lead rolls. Some of them admit they’ve been dreaming of since before their first party scene.

“It’s very nostalgic. It’s very poignant to watch them grow not only for themselves, but for the younger dancers who are peeking in the window at them or sitting here watching the rehearsal,” LBC Director Amy Orr said. “It is very special, and these are good girls.”

Orr said that parents of some of the older girls have brought in pictures of past performances, which have emphasized the growth of the dancers through the years.

Peyton Moody, a senior dancer who has been performing with LTC for almost 15 years, will be the Sugar Plum Fairy in this year’s production. She said she is excited to be playing a major part in “The Nutcracker,” which she was originally introduced to when she saw her older sister perform in it years earlier.

“I just loved it, when I was like two or three[-years-old], being able to sit in the audience and just being in awe, watching [my sister] and the other girls,” Moody said. “So, it is pretty special to be able to have made it this far and follow in her footsteps.”

The senior dancers also emphasized their passion for helping younger dancers learn and grow. Meg Stogner, a senior dancer who performs both as a doll in the party scene and Bo Peep, said she has been dancing for about eight years, and she is excited to be performing on stage with her younger sister.

“I really, really like it,” Stogner said. “We’ll go home, and she’ll be like, ‘Can you help me with this?’ I feel like we have a different connection than me and my other siblings.”

Stogner said she is also excited to be able to perform in some of her favorite dances this year.

“I was in the party scene the first year I did dance, so it is kind of like a full circle,” Stogner said. “That is where I started, and that is where I am finishing too, but Bo Peep is also a role I’m really excited for. That is what I’ve always wanted to be. I’m checking it off my list.”

For Sophia Willis, performing as the lead Arabian dancer is also the fulfillment of a long-held dream, that was only strengthened when she saw her older sister perform.

“She was mainly the reason that I started dancing in the first place, so it was nice to have her guiding me through school and dance,” Willis said. “She was Arabian her junior year, and I think when I watched her do it, I was like, ‘I want to be Arabian now even more because of her.’ It was interesting watching her do something, and then I get to do the same thing now.”

Willis has been dancing for 15 years, and she said that she has enjoyed mentoring younger dancers the same way that her sister mentored her.

“We get the opportunity to teach younger kids, and I’ve been doing that for four years now,” Willis said. “It has definitely impacted me a lot by watching them look up to me as their role model.”

Snow Queen Lizzie Doerr has been dancing for close to 15 years, and she said that serving as a mentor to younger dancers has been one of the highlights of this year.

“Since, I was little I’ve always looked up and admired the older kids,” Doerr said. “Knowing that I’m an older kid, I just want to set a good example for the [younger dancers], so they have someone to look up to like I did when I was little.”

Doerr said that the LBC is practically a second family for the dancers, a sentiment shared by other members of the company who said that they hope to return to support younger dancers in the future.

“A lot of friends are younger than me, especially that are graduating next year, so I’m definitely going be coming back,” said Shaylee Smith, a senior dancer who is also performing as a doll in the party scene and Bo Peep.

Smith has been dancing for eight years.

Orr said that the entire company would miss the graduating seniors next year, but she is excited to see them perform in the production.

“My heart is definitely dancing on stage with them,” Orr said.

She said she will also miss the dancers’ families, who she said are often heavily involved in each production.

“Next year, we will definitely be left with a little hole or void that someone is going to have to step into because moms and dads pitch in backstage,” Orr said. “They bring food. They help with publicity, sewing, painting props and sets, going to get guest dancers food, helping load and unload the theater. It’s actually a big thing right there.”

“We have revamped some things, so even if people have seen the Nutcracker for 12, 15 years, whatever [there is something new],” Orr said. “Our snow this year is going to look very different. It is going to have 23 snowflakes.”

Orr said to also expect updates to the Chinese tea, a mouse queen instead of a king and a significant change for the dolls in the party scene.

“Our ballerina dolls, which are Drosselmeyer’s creations in the party scene, [will have an updated dance],” Orr said. “This show, we are going to have what it is called a pas de trois. It is a dance of three, so there’ll be a soldier doll — our male guest dancer — and two young women will be dancing with him.”

HolidayFest on the River comes to West Point Saturday