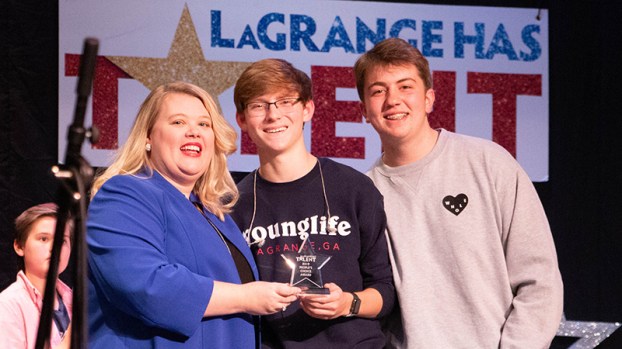 Ten acts took to the stage Thursday night to compete to win the annual LaGrange Has Talent competition.

Only one could take home the trophy, but at the end of the night with more than $26,000 raised, it was the children who won.

Proceeds from the event benefited Babies Learning On Course for Kindergarten Success (BLOCKS), which focuses on early childhood development and is working to improve access to high-quality early childhood education.

For The Wild featuring Davis Hunnicutt and Layton Payne took home the 2019 People’s Choice Award and a prize of $500, after raising $8,000 from votes. The two performed a twist on “Carry Me Away” by John Mayor.

The Hillside Montessori’s Peasants with Pitchforks took home the $2,000 prize after winning overall voted on by a panel of judges.

“We worked all summer and they actually played [Atlanta] Summer Jam Fest, and then just carried over into the year,” said Hillside Montessori music teacher Angela Hutchins. “There are no words.”

The group runs a small business at the school and have been raising money to go on an end of the year field trip.

“They decided they would put that money toward that, their adolescent fund and also discussed donating some to a charity,” said Hillside Montessori teacher Malley Pendergast. “It is incredible to see that hard work pay off. Just to see how proud they are and how much it means to them is amazing.”

Hutchins said that some of the students had not even touched an instrument before the summer.

“I was kind of nervous at first, but it was so cool to be able to win,” said lead singer Brooklyn Pointer.

“I was surprised when I heard we won.”

Adorned in pink and black, the band took the stage and rocked out their winning number of “Take on Me” by A-ha.

The Women’s Leadership Council of United Way West Georgia organized LaGrange Has Talent to help to make sure children are prepared when they enter kindergarten.

According to Blockswga.org, 80 percent of a child’s brain development occurs by age three and 90 percent by age five. To learn more about the United Way of West Georgia initiative of BLOCKS or how to get involved, call (706)-884-8292 or email info@blockswga.org.

Former Hogansville Mayor Douglas Eugene Boatner Sr. died at the age of 64 on Nov. 19.  For those he served... read more