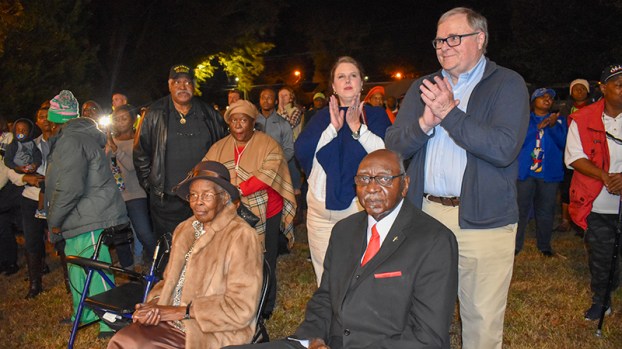 The second annual Light Up LaGrange Christmas Parade wove through neighborhoods from Calumet Park to Frank Cox Union Street Park on Friday night, drawing a crowd despite a steady drizzle.

District two Council Member Willie Edmondson said that the parade and tree lighting were a great way to bring the community together while letting residents of district two know how important they are to the city.

“It gives them a sense of belonging to the entire city of LaGrange, and it also gives them some pride because district two means a lot to LaGrange,” Edmondson said. “For many years, they felt as though they were the other LaGrange, and so we did this to bring us all together and made us make us a whole LaGrange.”

Edmondson said recent events and efforts in the community are already having a positive impact on the people who live near the parade’s route.

“They’ve taken pride in their committee and cleaned it up,” Edmondson said. “They’ve gone and done some things, enhancing their yards. This right here just does something extra for them.”

“It was a great turnout this year, and I think it’s going get even bigger,” Edmondson said. “I certainly hope that it gets bigger.”

Edmondson said that he was glad to see a variety of people from throughout the community in attendance, a sentiment that was shared by several of the speakers who spoke on stage.

“It is so good to see the unity take place here at this park [named] in honor of a friend of mine, Frank Cox,” Council Member Nathan Gaskin said. “His heart would have been just overjoyed to see the people out here right now, and I am so glad that all of you came out here to fellowship.”

“It is just a great opportunity for us to come together,” LaGrange Mayor Jim Thornton said.

Next year, the spot where the park has concluded and honored community members will look very different. The Georgia Department of Transportation recently purchased half of Frank Cox Union Street Park for a road expansion project, but Edmondson said that the city is working to purchase adjacent property in order to ensure the future of the park.

An 18-year-old male was arrested for breaking into numerous vehicles on LaGrange College’s Campus Thursday morning, according to the LaGrange... read more