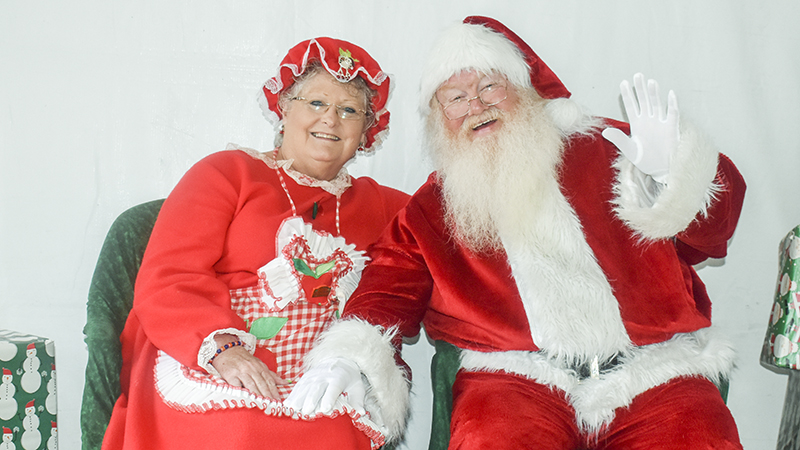 WEST POINT — Although the rain kept some residents of the Greater Valley Area from attending HolidayFest on the River, there were two very important celebrities in West Point Saturday asking what children wanted for the holidays.

Santa Claus and Mrs. Claus, also known as Dan and Lorna Pratt of Eclectic, braved the rain and wind to take photos and bring smiles to a few children’s faces.

Santa was present in his full red suit, red hat, black boots and white gloves. He was also sporting a real white beard down to his chest. Mrs. Claus was next to him in a full-length red dress and a red hat.

The couple got their start as the North Pole natives about four years ago during an event at the old Coca-Cola Bottling Company in Opelika. They were in full outfits during an event when they were spotted by a manager for Chick-fil-A at Tiger Town in Opelika.

Now, the couple begins getting requests to appear as early as August for the holiday season.

“The fun part is being with the kids,” Dan said.

He said the couple tries to have the best time they can while with the children.

“If you are not smiling and having a good time, how are the children supposed to have a good time?” Dan asked.

Dan said he also likes to joke with the children and have conversations with them. He said he doesn’t like only to ask them what they want, take a photo and send them along.

Mrs. Claus has her role outside of the big guy from the North Pole. Lorna said many times the children are scared of Santa, but they’ll come to her.

“Getting to do this is just a joy,” she said.

Mr. and Mrs. Claus said the hot items this year for boys are Legos. However, Santa tells the children to make sure to put up the toys after playing when them.

“Because the elves at the North Pole also play with Legos, and when Santa gets up in the middle of the night, he steps on them, and it hurts,” Dan said. “So, you have to put your toys up.”

Other popular toys are L.O.L. Surprise Dolls and anything related to the movie Frozen. Bicycles and Nintendo Switch game consoles are also popular.

As for the rest of HolidayFest, wet and windy conditions had an impact on numbers. Greater Valley Area Chamber of Commerce Executive Director Carrie Royster said there was a break in the weather at about 11 a.m. and several people were out, but the rain returned shortly and it cleared out.

She said there were more than 40 vendors, including food vendors.

The chamber prepaid for the inflatables and game truck, which made rescheduling tough.

“It’s just not easy to get everybody on the same page,” Royster said.