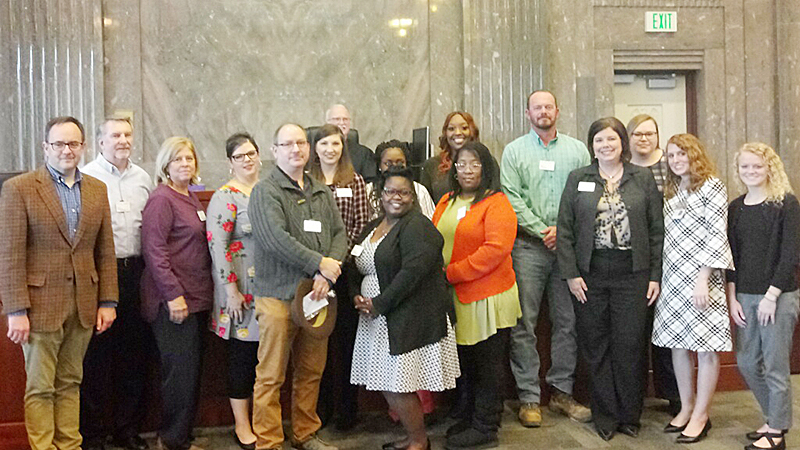 When Jennifer McCutchen became executive director of Troup County’s Court Appointed Special Advocates (CASA) in May, she set a goal to have 100 percent of all children in their care connected with a court advocate. McCutchen and her staff reached that goal on Tuesday afternoon with the largest graduation class in Troup CASA history.

Juvenile Court Judge Michael Key swore in the class of ten volunteers, who just completed a course in advocacy.

“To see us at 100 percent, I have chills,” McCutchen said. “Having this number of people in the community, it will really make a difference.”

The CASA staff asked for volunteers through word of mouth and social media.

“My grandmother used to be a foster parent, and one day I want to get into fostering,” said new advocate Porsche Spann. “I met Spafford at work one day and thought CASA would be a good start. It’s always been on my heart to be an advocate for kids who don’t have a voice.”

Spann and Spafford met on lunch breaks, and over the phone.

“She was very accommodating so I could participate,” Spann said. “I’m excited to jump in and get going.”

After being sworn in, the new recruits each received the name of the first child they would be advocating for. The class of 10 brought the number of advocates to 42, according to McCutchen.

“We have some volunteers who’ve been with us 15 to 18 years, since the beginning,” McCutchen said. “We become a family working together, and then an extended family with the kids. We even have kids who come back to touch base. This is by far the best job I ever had.”

Mayor Jim Thornton was there to witness the ceremony.

“This is a great program,” Thornton said. “These volunteers play a critical role in helping kids who are new to the juvenile justice system. I’ve been a supporter of CASA since I was on the board with the United Way. I’m pleased to see the largest class ever.”

Thornton addressed the class at a celebration following the ceremony.

“You’ll be working with individuals, but you’ll be affecting the entire community,” he said. “On behalf of all our citizens, I offer you our gratitude. I’m a lawyer by profession. There are important roles for lawyers, but sometimes the suits and ties don’t provide the warmth and protection kids are in need of. You are a testimony to the compassion of our citizens.”

Beth Jackson is one of those citizens.

“I lost my brother suddenly the day before his 41st birthday. We were very close, best friends,” Jackson said. “I felt a hole in my heart. I pulled up the [newspaper] story [about the upcoming CASA training] and saw that this would be the last class [of the year], and I thought, let me make my brother proud.”

Jackson was already working as part of Head Start, and her brother would tell her she had the heart to work with kids.

“I always had a love for kids, though I have none myself,” Jackson said. “Working with CASA, I can give back to the community and change a child’s life. You have to be the change you want in the world. I’m being the change.”

Jackson was so excited about the opportunity that she told co-worker Aldes Brooks, and the two went through the training together.

“I was a foster child at age 10, so I always said I would get involved,” Brooks said.

Brooks works as an accountant over the grant program of Head Start and doesn’t get time with kids as part of her job. When Jackson mentioned the CASA opportunity, Brooks said she knew it was for her.

“I know how it is to be in the system,” she said. “We get to see both sides of their case and make a recommendation.”

“I’m at the point in my life where I can give back to someone who can’t speak up for themselves,” he said.

One advocate, Frances Smith, is studying pediatrics at Mercer.

“I saw Nicole’s ad on Facebook,” Smith said. “I’ve seen some of these cases. That’s what got me involved,” she said.

One of the cases she learned of in her CASA training touched her so much that Smith bought Christmas presents for the kids in that case. As part of their service to the 97 children in their care, CASA collects toys for the kids’ Christmas. They also collect for 40 children in DFCS.

“This is the first time we are using an Amazon list,” McCutchen said.

If you would like to buy something for CASA and DFCS kids, you can use the Amazon wish list at a.co/aK3WOe0.