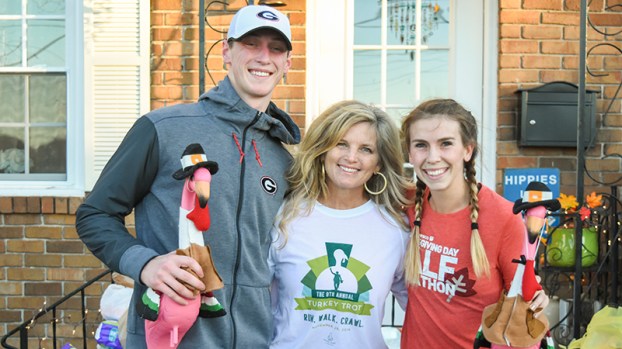 Jonathan Pelham and Jenna Oden, who were the first place finishers in Thursday's Turkey Trot, pose for a photo with organizer Lisa Alford. --Daniel Evans

Nine years ago, Lisa Alford and a small group of friends couldn’t make it to Atlanta for the annual half-marathon run, so they decided to start a smaller run in LaGrange.

The first Turkey Trot had about 25 people, and the event has continued to grow year after year, but Alford never thought it would build like it has. On Thursday morning, an estimated 150 people got out of bed, braved the cold and ran two or five miles in LaGrange to start their Thanksgiving mornings.

“It’s a small town so everybody cooks. They go to their family’s house, they are busy on Thanksgiving morning, so I never would have thought people would take time out of their day to show up here, so I’m very thankful,” Alford said of the event’s growth.

The 7 a.m. run starts and ends at Inner Path yoga studio, which Alford operates on Smith Street in LaGrange.

The race is always free to run, with Alford just asking for a donation each year. This year she asked for runners to donate a pack of diapers to benefit Safe Families for Children. By the time Thursday’s run started, there was a large stack of diapers right in front of the yoga studio.

“[Host] families get the [diapers] and maybe it’ll help them out a little bit financially,” Alford said.

The first-place finishers get to take home the turkey flamingo. Alford said each year she asks the previous winners to bring the flamingos back and somehow they always make it back.

“They sign it, and then they bring it back the next year,” Alford said.

Alford said every year Becca Eiland and Anna Knight have helped her set everything up, but this year both of them had to be out of town. She said her daughter, Madison Alford, stepped up to help with creating the route, as did others. Her mother, Shirley Morman, also always sets up a water station.

“It’s nice to know that I have people that step up and help,” she said.

LaGrange native Addison Turner, 13, has relied on a special connection with a Georgia linebacker as he battles a health... read more