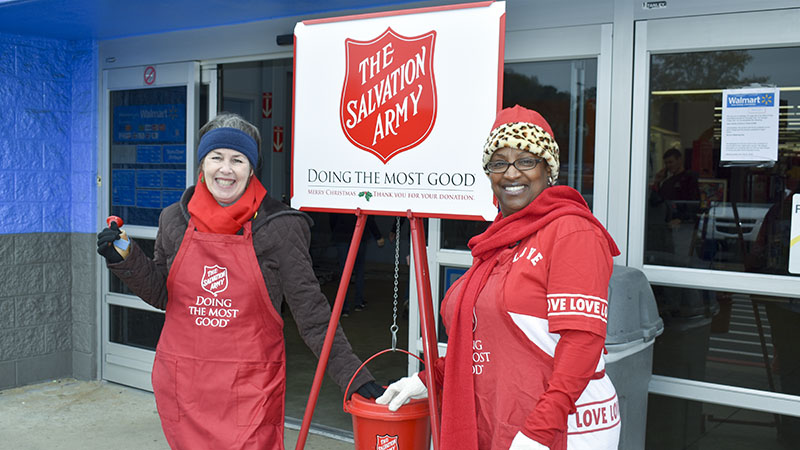 “All who volunteer will get their name in a drawing for a chance to spend the night at Great Wolf Lodge for up to five family members,” she said at Tuesday’s city council meeting.

Great Wolf Lodge has donated five prizes as a thank you for bell ringers. The grand prize is an overnight deluxe Suite for a family of five, which includes an overnight stay and water park passes for one full day for the family.

Four Splash Passes are also being drawn for. Each Splash Pass gives a full day’s access to the water park for a family of four. Thornton said she would love to see other stores allow the kettle outside their business. Any West Point business owner who hosts the kettle will also have their name in the drawing.

In 2019, The Salvation Army will serve more than 25 million people across America including many in West Point, according to a statement released by Thornton.

The councilwoman suggested groups of friends or local clubs could agree to donate time together to ring the bell. The kettles have a new feature this year. All kettles in Troup County have a scanner that accepts Google Pay and Apple Pay, so donors do not need to have cash to give at the kettles.

Bell ringers are needed at Johnny’s Pizza, every Friday and Saturday from now through Christmas Eve. Hours are 6 to 8 p.m. each night, with an additional 4 to 6 p.m. slot on Saturdays. If you would like to be a bell ringer, or host a kettle outside your business, call Sandra Thornton at (706) 518-2966 or email her at sandrathornton01@yahoo.com. Council members are also partnering with the Salvation Army to provide toys for West Point children at Christmas. Council members are personally giving to children who are part of the Salvation Army’s angel tree network. Anyone who would like to donate a new toy to a West Point child can drop one off at city hall. A public hearing was also held Tuesday night about the proposed 2020 city budget, but no one spoke.

The next chance to comment on the budget will be at the council’s work session on Dec. 5 at 5:30 p.m. in City Hall. That will be the last chance to offer comment before the council votes on the new budget at its regular meeting on Dec. 9.