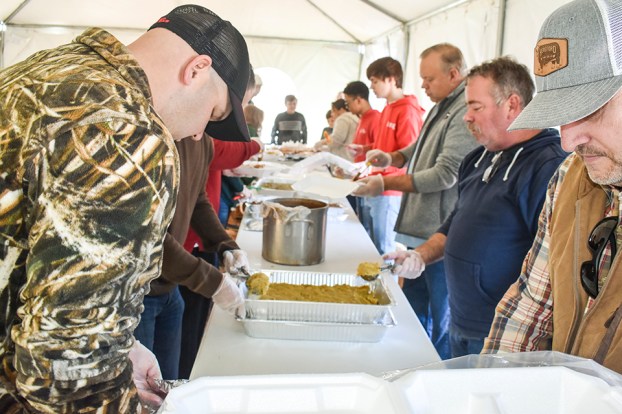 West Point mayor, business and volunteers give out Thanksgiving meals

At the intersection of 10th Street and Martin Luther King Drive, Tramell, business owners and volunteers with the Point Refuge Church gathered to prepare food for those in need Thursday.

The volunteers prepared about 250 meals on Thursday and were nearly out of food by 11:30 a.m.

Those needing a meal were able to walk up to a white Jackson Services tent on Martin Luther King Drive and receive a plate.

Tramell said he was confident the group would run out of food, but he said he would put on the event regardless of how many people showed up.

“It wouldn’t matter if it were a handful or if we ran out of food. We still would have done this,” he said Thursday.

Matthew Thrower, pastor of Refuge Point Church, said although Thursday is Thanksgiving, the church is always looking for ways to serve others.

“It’s not just about the day. t’s what we do,” Thrower said. “This is something we are committed to — serving any way we can, and it just so happens we are serving on Thanksgiving.”

Back to square one for group home

During its most recent meeting, the LaGrange City Council voted against the rezoning of 1702 Adamson Street, in a rare... read more