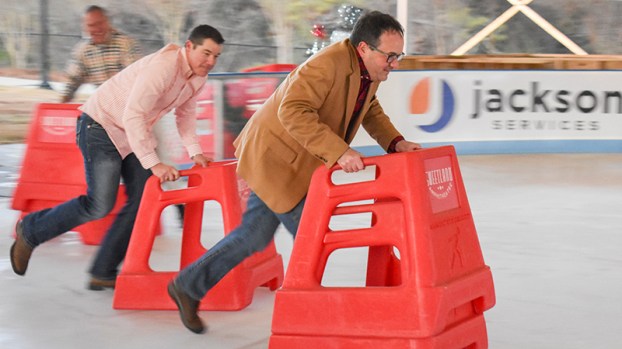 Sweetland on Ice opens to the community

Sweetland on Ice opened back up on Friday, creating a seasonal look at the concert venue.

This is the second year Sweetland on Ice has been in LaGrange in its current form and the third year that an ice skating rink has operated at the amphitheater. Community members said they were thrilled about the return.

“There is so much to love about Sweetland on Ice. It’s one of my favorite things about LaGrange,” said Harrison Lawson, a staff member at Sweetland.

When talking to staff, only positive remarks were made toward the tasks at hand, and many of the staff members worked at Sweetland last winter.

“Our staff and crew know a lot more about the technicalities of ice rinks this year, which is super,” said Keyal Loveland, director of Sweetland. “We have a solid crew and a 98 percent return rate.”

With Sweetland’s concert series only lasting around five months, staff at Sweetland needed a way to make use of the amphitheater in a fun and unique way during winter months. Because LaGrange is a growing city, the idea of a seasonal ice skating rink seemed to fit the bill.

Lots of new additions have been added to the skating rink this year, including a permanent foundation for the rink and the inclusion of bumper cars.

“This year, the foundation for the rink is not temporary,” Loveland said. “The rink is anchored into concrete pillars which makes skating safer and more efficient year after year.”

As for the bumper cars, Loveland said the new addition to Sweetland on Ice is still in the works. She said the cars are currently being manufactured and will be available at Sweetland once safely and efficiently checked.

Another new addition is “Bobby the Seal,” which is a skating aid that allows parents to help their children skate. Sweetland will be posting updates on social media regarding when these new additons will be avalible.

Sweetland on Ice is hopes to continue to grow this year as  the skating rink continues to add new and exciting features.

“Last year, we had around 13,000 skaters at Sweetland on ice,” Loveland said. “This year, with Visit LaGrange helping to market, we are hoping the numbers will increase.”

Sweetland on Ice will be open from now until Feb. 17, 2020. The cost of ice skating with  rental is $12 and without rental is $6 for two hours of skating.