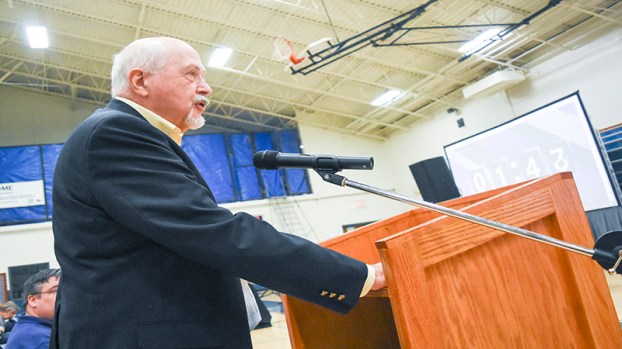 The Troup County School System held a town hall meeting on Monday night at Gardner Newman Middle School, giving the community a chance to ask questions and get responses from the school board and Superintendent Brian Shumate.

Most of the focus of the town hall was on a request from local seniors for a property tax exemption. The town hall started with a presentation by Interim Chief Financial Officer Don Miller, which broke down the school system’s budget. After the presentation, names were of citizens who signed up to speak were drawn at random — giving community members about 90 minutes to ask questions of the board.

Each person whose name was called was given two minutes to speak, and Facebook questions were taken for the last 30 minutes.

“We are not asking for the moon. We have done this for years, and I know we don’t have children in school,” said Marcelene New, president of the Tax Relief for Troup County Property Owners group. “You may not have children in school right now, but we are at a point in our lives where our incomes are lower, our property taxes are more, and we are asking you to cut this $118 million budget 3 to 4 percent. That can be done very, very easily with some of the figures we gave you. A little here, a little there. Tweaking a budget is what we ask you to do.”

School board member Brandon Brooks responded to the request saying the “tweaks” are not as easy to make as they sound.

“I totally agree with tweaking a budget, but in those same lines — even though we are [working] with a $118 million budget — tweaking a budget represents families, and we are very mindful of… every tweak. Those tweaks are homes,” Brooks said. “They are paraprofessionals. They are bus drivers. They are people who are driving buses for the benefits. I’m not making excuses… but we are very mindful of the cuts because we know they represent families.”

School Board Chairman Kirk Hancock said the school board wants to make sure whatever it decides is sustainable. Miller said the school system is already has a $1.8 million deficit for the upcoming budget year, plus any cuts made in the state budget. Hancock also explained the process for how a tax exemption for seniors would be passed, while cautioning everyone to consider the request carefully.

“We will make a recommendation for our representatives to get onto the ballot, that will happen, and we commit to doing that,” Hancock said. “What I ask is that we step back as a community and make sure that what we do is first and foremost sustainable because we can’t do something and turn around the next year and [have it] put us back into a hole. That [the decision is] strategic, that it helps our kids build toward a world-class education.”

Hancock also said tax abatements would not impact seniors on a fixed income that rent their home, and the cost might eventually make it necessary for younger citizens to pay more taxes.

“We’re balancing [this decision] with the fact that if we create an entitlement for seniors, it pushes the risk to the non-seniors for any future funding,” Hancock said. “That’s something we need to be very cognizant and fair about.”

The tax relief group has asked that the school board pass a resolution eliminating property taxes for seniors early next year, so the Georgia Legislature will have a chance to pass the measure in time for it to appear on ballots in May. The board has agreed to the request, though the exact parameters of that resolution had not been determined as of Monday night.

“Three months ago, we came to you with a simple request — pass a resolution. Give us an opportunity to vote on it,” Chuck Franklin said. “The same people that will end up voting are the same ones that elected you. Do you have confidence in them? If you pass this resolution and get it on the ballot next May, they will have an opportunity to vote. They may say no. You don’t know. I don’t know, but I have a feeling they would like to say something. All we’re asking you to do is to get this on the ballot.”

Frank Barnes also spoke in favor of the tax relief, demanding that the school board take action.

“I’m not worried about confrontation. I’m not worried about being friends with anybody. I don’t want to make enemies, but these people are tired of this kind of nonsense,” Barnes said. “What I mean by nonsense is it’s always ‘we can’t do better’ when there are 16 counties already doing this,” Barnes said. “Explain to me why we haven’t got our budget and our house in order in the 30 years I’ve been living here. I think I’m looking at the reason why.”

“We did not create these problems,” Hunt said. “We want to make this county a better place to live and go to school. These people do not deserve some of the anger being directed at them.”

Franklin said that he doesn’t want the issue to divide the community, and people on different sides should be able to overcome differences of opinion.

“We’ve about got our community as divided as our nation, and we shouldn’t be that way,” Franklin said. “Why in the world would we be mad because someone had a difference of opinion? I think everybody here wants a good education for our kids and wants to do what we can for seniors, but we are better than what’s going on here.”

Throughout the night, speakers spoke on both sides of the issue.

“I pray that you do the right thing by this community, that you take a look at that budget, you cut out any wasteful spending you can find, but don’t give it away. Invest it back in our children,” Harrelson said.

“I hope you realize Mr. Superintendent that there are good people on both sides of this discussion, but I want to caution the board about drastically reducing your budget when we are asking so much more of you today and to improve where we are today,” Lukken said.

Nichols served as interim superintendent from August 2018 until Shumate started in July, and he said the board has two goals — ensuring students get a quality education and elevating the status of the school system to help the community as a whole. He said the board should consider those two ultimate goals and how a property tax exemption might affect TCSS.

“I know you haven’t made the decision yet, but if you decide to grant this exemption for seniors, I would ask you to do it very judiciously,” Nichols said. “I caution you not to give away the money that you need to achieve those two goals that I just mentioned.”

The property tax relief group passed out five questions before the meeting and posted them on their public Facebook page. However, many of the questions involved numbers that Miller said didn’t add up to the official school system numbers. He invited members of the group to sit down so that they could go over the numbers together.

“I’m not challenging your accuracy,” Miller said. “I’m just saying what I see in the reports is not correct. And some of it is just having a discussion to understand the different terminology.”

Miller’s presentation covered the financial situation of the school system throughout the last decade, including what the state funds and what it doesn’t. Miller’s entire presentation is available on the TCSS website.

Students from all 11 Troup County elementary schools competed in an engineering competition on Nov. 14 at the Georgia International... read more