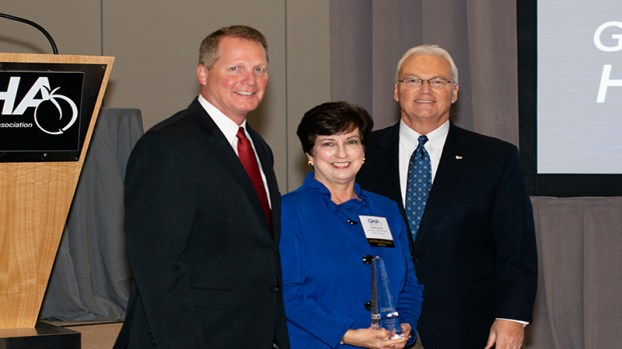 WellStar West Georgia Medical Center Vice President and Chief Operating Officer Charis Acree was awarded the Georgia Hospital Heroes Lifetime Achievement Award at the Georgia Hospital Association’s (GHA) annual Hospital Heroes Awards luncheon recently in Atlanta. According to a press release from the hospital, Acree, who was the only health care worker statewide to receive the award, was recognized for her service to the hospital and West Georgia community.

Acree has a 40-year career in healthcare, beginning as an administrative intern and working her way up to her current senior executive position where she is responsible for several hospital operations, such as cardiovascular services, oncology, pharmacy, laboratory, respiratory and rehabilitation services.

One of Acree’s most influential contributions to the community was the idea to introduce hospice care at a time when the concept of this type of care was not widespread around the state.

Around 1980, she and the late Dr. Julian Duttera, medical oncologist, traveled to Washington, D.C. to garner legislative support for Medicare reimbursement for patients in need of hospice services. While waiting for the reimbursement to finally become effective in 1986, Acree worked to develop a formal hospice program.

Acree has also led the charge in other significant programs in the community, such as the hospital’s Florence Hand Home-skilled nursing facility, home health, dialysis and wound care center.

“Charis Acree’s work has helped countless individuals, locally, statewide and nationally,” said GHA President and CEO Earl Rogers in the press release. “From community residents to WellStar West Georgia Medical Center employees, you would be hard-pressed to find anyone who has not been impacted in a positive way by her dedication to her community. We are pleased to honor her with this award.”