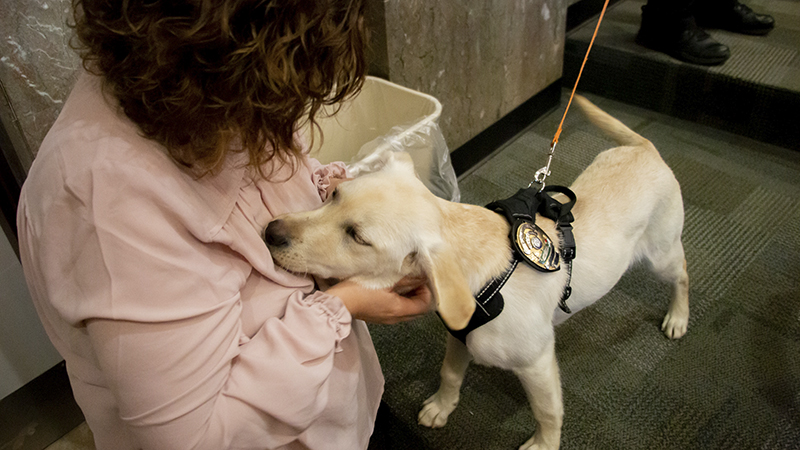 Four paws made a visit to the juvenile courtroom Thursday morning, but importantly the waiting room.

LaGrange Police Department’s youngest recruit on the force, Officer Donut, a five-month-old Labrador therapy dog in training, visited children before they had to go into the courtroom.

Sometimes while waiting to be called into the courtroom, the juveniles can wait for long periods of time.

“The stress can just build and build and build,” Key said. “We have a lot of things we do to distract them. We have books to read, videos going that they can watch and other things, but dogs are just so nurturing and comforting.”

When Donut’s owner, LPD Sgt. Marshall McCoy, got the request for Donut to come to the courthouse and interact with children, he said he thought it was the perfect idea.

“There’s all kinds of issues that might have a child sitting in here, and that can be a traumatizing experience in and of itself,” McCoy said. “One of things the trauma dog program can do is work with the kids here at the court.”

While the child waits, he or she can play with the dog to relieve nerves, but it also gives the administrators a chance to see how that child interacts with the dog.

“There’s some things you can really find out,” McCoy said. “The court administrator can observe if the way they interact is really inappropriate or appropriate. If it is inappropriate, the dog can maybe fix that or it’s something the court can address to what’s going on in his general life.”

While in the waiting room, children were able to play fetch with Donut and see all the new tricks he’s learned.

“No matter the kind of day you’ve had, dogs just make you feel better and it does the same thing for these kids,” Key said. “Anything we can do to relieve the stress for these kids, and get them through the day is good.”

McCoy said that is was a successful first trip for Donut in at the juvenile courthouse.

“The kids loved him … Instead of sitting there, maybe with a frown on their face waiting their turn, you could see their smiles and how much he made them happy.”