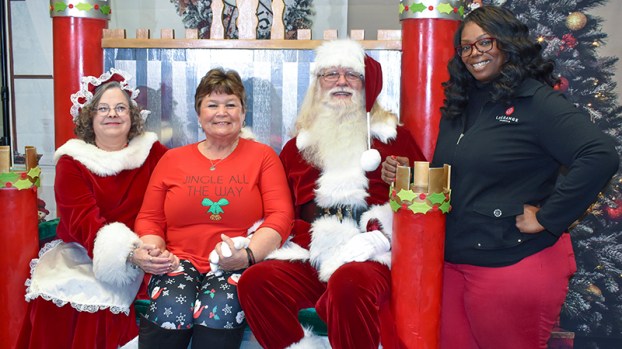 The Sons of Lafayette and the Choral Society of West Georgia took turns caroling on LaGrange City Hall’s steps on Tuesday night, while visitors took turns whispering wishes to Santa and Mrs. Claus during City Halls After Hours.

The event was organized by the City of LaGrange and the LaGrange-Troup County Chamber of Commerce in order to spread holiday cheer and encourage citizens to visit city hall and get to know the people who work there.

“We had two choral groups with us tonight, and I don’t think anyone [in my memory] has ever sang Christmas carols on the front steps of city hall, so it touched my heart,” City Manager Meg Kelsey said. “We had a good turnout from the chamber. We appreciate them partnering with us to open up city hall at Christmas time to show off our building and some of the improvements that we’ve made over the last year or so. It’s been a nice event, and we’ve had a lot of good public participation.”

Kelsey said the city wants to have a relationship with its citizens and for people to know who to go to with needs, for job openings, to pay a utility bill.

“It’s also good to have relationships between the community and the city staff,” Kelsey said. “I think it makes people feel more at ease to know our names on a personal level and feel comfortable giving us a call or saying, ‘hey, can you fix this?’ We like that. We really like positive feedback as well as the negative feedback that sometimes we get on things we need to fix, but I think it is good on a personal level to know us and know what services we provide.”

Those citizens include the choral performers who filled the building with Christmas cheer even as some of them visited city hall for the first time.

Choral Society of West Georgia Artistic Director Bettie Biggs said the group had fun singing on city hall’s steps, and she thanked the city for inviting the Choral Society.

“We had a good response from the audience and had them singing with us on several occasions,” Biggs said.

In addition to the carolers, the event also featured a visit from Santa and Mrs. Claus, a chance for citizens to make wishes for the new year and plenty of holiday treats.

“What I like about it was that it is just festive, and people feel that they can come and enjoy Christmas, and this is a part of their community,” City of LaGrange Marketing and Communications Manager Katie Mercer Van Schoor said. “We wanted everybody to feel that they can go through, walk around the halls and walk upstairs and downstairs. We had an event on each floor.”

Anyone who wants to hear more Christmas Carols in downtown LaGrange is invited to attend the community sing-a-long “Christmas Caroling at Lafayette Square” on Dec. 21 at 5 p.m.