Biblical History Center focuses on the reason for the season 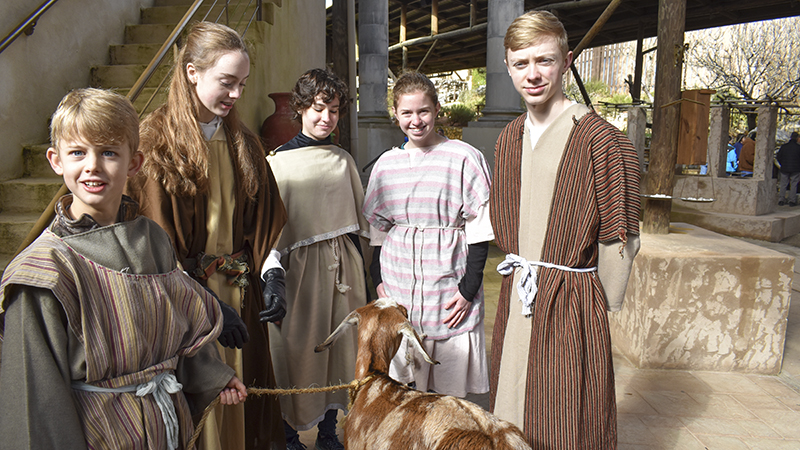 On Saturday, The Biblical History Center held “A Visit with Mary and Joseph,” a live nativity spread over several outdoor exhibits.

The day was part of the “Follow the Shepherd Walks,” museum tours, which are focused on the Christmas story and guided by shepherds.

Docents Vern Jordin said he first came to the center as a visitor.

Jordin said brought his granddaughter, and she texted through the whole tour. He said he thought she’d missed everything, until she summed up her visit at the end.

“The whole Bible makes sense to me now,” she said.

Jordin has been in ministry 30 years, 14 of those as an army chaplain, and he said he is still fascinated by the impact of the center’s tours.

“I always try to bring the Bible off the page. This place does better for me than any place else,” he said.

Jordin started as a volunteer in April 2014, and in October 2015 was invited to join the staff.

“It’s been great,” Jordin said. “While serving as pastor, you spend hours over a sermon you preach only once. Here I’ve practiced and prepared.”

It’s an honor that puts the Biblical History Center in company with the Louvre in Paris and the Met in New York, according to Jordin. However, it was the people who are on display at on Saturday.

A couple played Mary and Joseph and gave tours of their home, a cave. Two wise men took selfies with visitors alongside Earl, a live camel. A shepherdess watched over various livestock.

“It means a lot to be giving back to the community and to families, to be able to bless others through my ministry of dance,” Meadows said.

Over at the shepherd’s tent, volunteers made a flat bread, which was baked over a fire and served with honey. They called it shepherd’s bread, and one family made it together.

“We looked for a place to serve our community as a family. It’s the perfect place for us,” mom Kim Rocker said. “We became interested when the kids came for a field trip and an archaeological dig.  The Bible comes alive when you climb a watchtower or sit at the city gates.”

The Shepherd’s Walk continues through Dec. 21, the last day of the year for the center.  Reservations are required for the walk.

The center reopens Jan. 3 with its traditional garden walk and standard tours are available.  Special tours like “Women in the Ancient World,” “Plants in the Bible,” and “Psalm 23” are available on request.