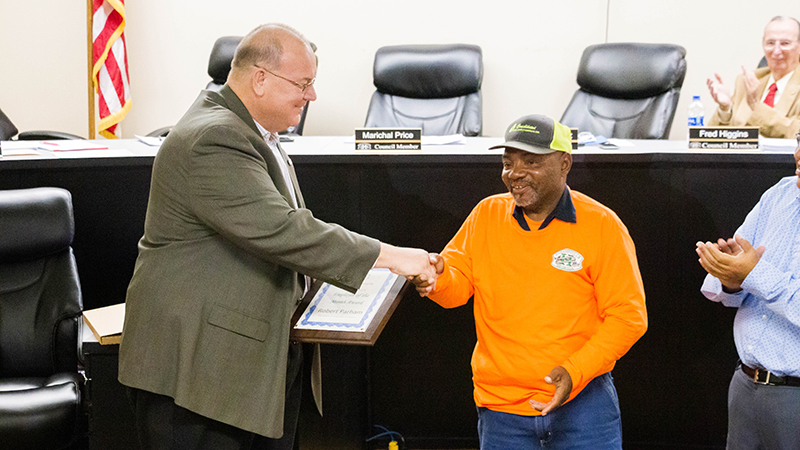 Two Hogansville employees were honored Monday night for their hard work and dedication to the city.

Hogansville Police Department and the Hogansville City Council recognized Lt. Benjamin Gates for his 15 years on the force.

“He has been dedicated, and it shows too,” said Hogansville City Manager David Milliron. “Lt. Gates consistently gets kudos from the public.”

“Nobody likes to see those blue lights in your rearview mirror,” Milliron said. “Even those folks will say he treats you with professionalism. He cares about the city. He gets involved with the city. For that, we are very honored and pleased.”

Gates was given the employee service award for his time served from 2004 to 2019.

Milliron joked that this award means that he signs up for another 15 years.

Hogansville Equipment Operator Robert Parham was named Employee of the Month for November.

The employee of the month award was a newly installed award that was created because the city wanted to do more for its employees. Milliron said it is run by the department heads and superintendents.

“His supervisor said, ‘Robert Parham is a hard person to describe in just a few words. He doesn’t talk much, but when he does talk it, makes sense. Everyone understands what he is saying,’” Milliron said.

His supervisor also added in a letter stating, “He always shows up early to work. He’s trustworthy. He knows what to do every morning. He’s reliable. He’s an experienced equipment operator, knowledgeable of where all the lines run in the city. It’s a privilege to have him as part of the staff with the water department.”