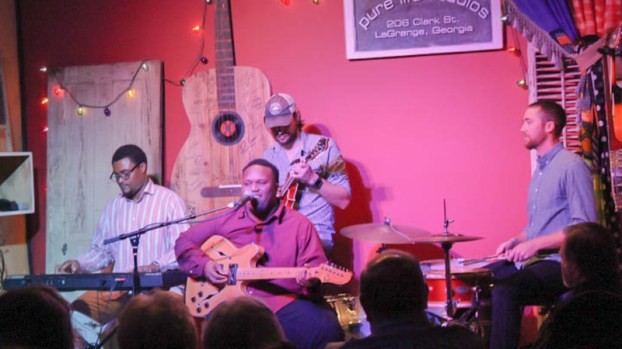 Locally based blues musician Jontavious Willis celebrated a Grammy nomination for his album “Spectacular Class” over the weekend at Pure Life Studios.

The album was nominated in the Best Traditional Blues Album category. During the celebration on Sunday night, Willis shared the stage with friends and family who performed with him when he was just getting started.

“I always enjoy coming home and all the folks from Greenville, LaGrange and Hogansville, they came down, and we have a good time,” Willis said. “We had a packed house [Sunday night]. It was fun. I always have fun at Pure Life. It is my favorite venue.”

Willis began performing in venues publicly at festivals and Pure Life Studios in 2012. This year, Willis performed as the opening act for Grammy Award winning artist Keb’Mo’s 2019 tour, among other appearances. He also performed with Taj Mahal and Keb’ Mo’ in a 2017 tour that took him to a variety of venues, including LaGrange’s own Sweetland Amphitheatre. He will perform at the Anchorage Folk Festival in January, as part of a busy tour schedule. However, he said performing at Pure Life Studios feels like coming home.

“It’s moving, and it is inspiring, and I feel proud of him,” said Maggie McDonald, the owner of Pure Life Studios. “It’s been amazing to watch him because he is not affected by what’s happening around him. He is affected by the people he meets, and he shows that in how he responds to everybody. … He shared the spotlight [Sunday] night.”

Willis was born and raised in Greenville, and he graduated from Callaway High School in 2014.

LaGrange police officers responded to the Econolodge motel on Whitesville Road Saturday morning in regards to shots fired into a... read more