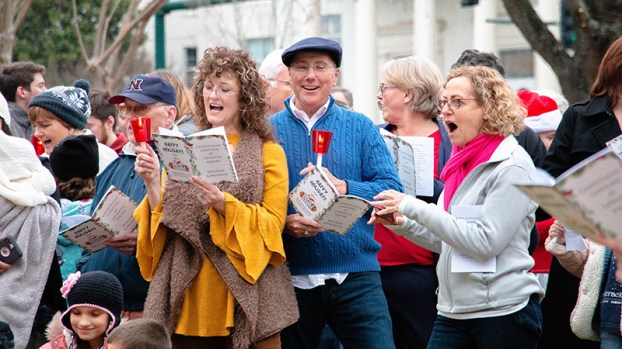 Locals take to the square for a new Christmas tradition

A new Christmas tradition began on the square during the weekend.

Families throughout the community joined its voices together and celebrated the Christmas season with Christmas caroling on LaFayette Square.

“We’re very excited about the brand new caroling tradition,” said Darian Krimm, Masters of Ceremony and Sons of LaFayette Artistic Director. “We actually got the inspiration from something that happens in New Orleans. It’s been an annual event of caroling on their square. Hundreds and hundreds of people show out for the wonder community tradition.”

A local citizen, Bob Goehring, brought the caroling idea to LaGrange after learning about the New Orleans tradition going on for more than 40 years. Krimm said this event is a new and another way the community can come together.

“It is really the community that is doing all the singing,” Krimm said.

Songbooks and candles were passed around the crowd and the sounds of traditional Christmas carols were heard throughout downtown. Music leaders in the community and performing groups helped guide and lead the carols.

“This a wonderful alternative to gather together and raise our voices in song,” said Choral Society of West Georgia Artistic Director Bettie Biggs. “It is an important community event, and all the volunteers that helped make it happen were great.”

Barbie Watts, Downtown LaGrange Development director of promotions and marketing, said the turnout was wonderful for it being the first year.

“It is a great way to wind down our holidays,” Watts said. “It’s a great way to slow down and enjoy the Christmas right here at the end. Everybody’s got all their hustle and bustle done.”

Watts added she noticed several families from out of town that attended.

“It just brings our community together even more,” Watts said.