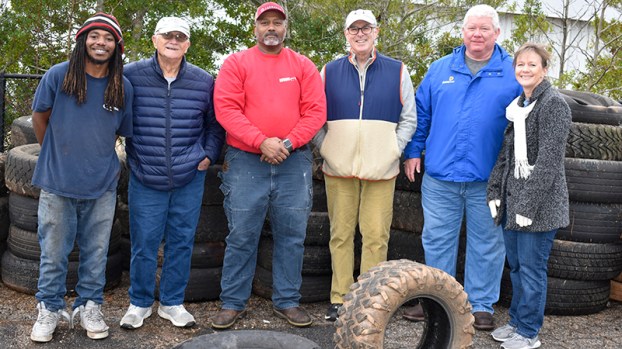 Larry Hightower, Mac McGowan, James Reed, Scott Landa, Ken Pope and Donna Powell pose for a photo next to the pile of tires collected at Bring One for the Chipper on Saturday. (Alicia B. Hill | Daily News)

Keep Troup Beautiful partners gathered at the LaGrange Recycling Center on Saturday in order to help locals dispose of items that might otherwise go in the landfill.

However, despite Bring One for the Chippers’ original goal of helping people get rid of old Christmas trees, tires represented the largest number of donations by far.

On Saturday, the Christmas trees dropped off barely hit the ground before eager fishermen scooped them up to create fish habitats. Meanwhile, trucks dropped off a variety of tires, quickly filling the space allotted for them. Keep Troup Beautiful Executive Director Scott Landa said the tire donations are important because the event makes them available for other uses instead of being left to sit.

“They don’t break down all by themselves,” Landa said. “If you put them out in the woods, they’ll be there forever, and they can be a danger if they can catch fire or something else like that happens.”

Recycled tires can also be used for playground mulch, but Troup County has also seen first-hand one of the newer, more innovative uses for recycled tire rubber on its roads.

“The material that is recycled that comes out of tires is useful,” Landa said. “Here in Troup County, we’ve already seen that because of some of the paving that has gone on Interstate 85 and Tom Hall Parkway. Both have recycled tire content in that asphalt.”

Landa said Saturday’s Bring One for the Chipper event had a great turnout, and those involved said they hope will encourage more people to visit the center throughout the year.

“We have regulars who come by, but this also works us in with Keep Troup Beautiful, and as a city, we need to work together with the county in order to make this work,” said James Reed, recycling center supervisor. “It is a big awareness [effort].”

Landa and Reed said they hope to see the number of people recycling continue to increase, especially with easy options available, such as the blue recycling bins that the City of LaGrange provides.

Citizens of LaGrange aren’t the only ones who regularly use the center though, as people from throughout the area make a point of dropping off their empty cans, milk jugs and old newspapers.

“We pick up all the county cans now that come here, but a lot of the recycling that you see out front is not only from Troup County. People come from Pine Mountain, Mountville, that area, and they bring it here to recycle instead of going to the convenience centers. So, we are increasing every month on our total weight.”

Locally, there has been a major focus on litter in recent years, and Landa said that cleaning up litter and increasing recycling both foster a mindfulness of what happens to trash.

“I think they do go hand in hand, and the reason why I say that is people who care about making sure stuff doesn’t go in the landfill — they won’t litter, and they will recycle,” Landa said.

“There is that tie. The negative side of that is people who litter, don’t care, and that extends to the litter that goes out on the roadsides, but also, they don’t make the effort to bring stuff to a place like this [recycling center]. They don’t make the effort of getting a blue bin from the City of LaGrange free of charge. What we try to do is help them care.”

According to Landa, the most recent litter index, in March 2019, showed less litter on the roughly 400 miles of county roads analyzed than previous years, but more work is still needed.

“Little by little it is getting better, but we would like to see consistent ones. One is the best score,” Landa said.

On the scale used by Keep Troup Beautiful, a one might look like a single can on a mile of road, while a four would be a roadside covered in constant trash. Troup County received a 1.7 last year.

The City of LaGrange will host a litter cleanup on Saturday from 8 a.m. to 10 a.m. starting at 1808 Vernon Road in the Weathers Honda parking lot.

Behind the Mask king and queen candidates presented at kickoff event

The coming month will be packed with fundraisers, fun events and information about a great cause, as candidates for king... read more