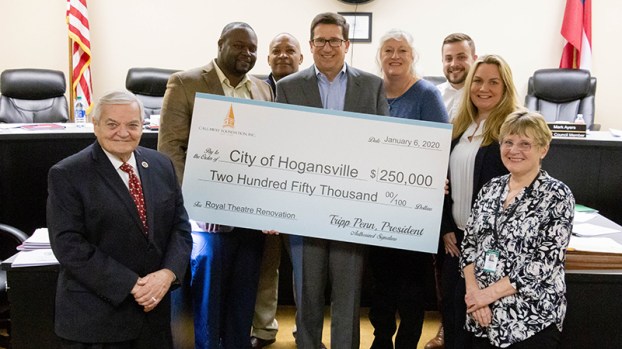 Excitement was high Monday as the City of Hogansville received its largest grant to date.

Callaway Foundation President Tripp Penn, presented a $250,000 check toward the renovation and restoration of its historic Royal Theatre.

“Our trustees are really excited about the renovation of the theater, and we wanted to be a part of that,” Penn said. “We know it’s important for a community to have a place to gather, and we just look forward to the excitement and energy.”

Penn said that the Callaway Foundation was excited to see what the renovated theater will bring to Hogansville in the years ahead.

According to Hogansville Community Development Director Lynne Miller, excluding SPLOST dollars, this is the most money they have received to date.

“One of the biggest things that were important [to receive this] was a business plan,” Miller said. “The Callaway Foundation really wanted to know, not only that we are excited to get this building renovated and opened as a theater, but then what we were going to do. “

The city submitted its business plan with its application, which included documentation of what type of performances it would host, when and the financials related to that.

“It would break even,” Miller said. “These theater projects in a city aren’t supposed to make a lot of money, but they’re certainly not supposed to lose money.”

Miller said they used an outside source to help create the business plan.

“This is something we have been talking about with other grant agencies about too,” Miller said. “When this theater reopens, is this going to help the other buildings that surround us that are now vacant? It seems to be happening already. We’re really happy about that.”

According to Hogansville City Manager David Milliron, the funds will be matched with SPLOST dollars. Construction will begin once the former PNC bank building is renovated this spring for use as the future city hall.

Monday marked one year since a deceased baby was found on the side of Boy Scout Road in Troup County... read more