Five veterans honored by Quilts of Valor in West Point 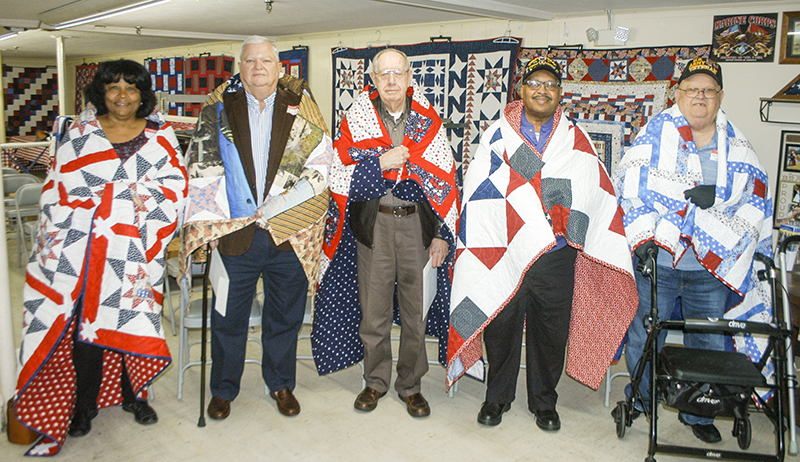 Each one received a beautiful new quilt made by the skilled quilters of the Georgia-Alabama State Line Chapter of the Quilts of Valor. Recognized for having served our country in the military were U.S. Army veterans Norman Messer of Opelika; Frank Lyons of Valley; John Wilder of Columbus; Shirley Bassett of Fort Mitchell; and former Marine paratrooper Donnie Beck of Valley.

“Thank you for your part in keeping our country free and allowing us to enjoy the things we do,” he said.

Referencing the tense situation right now in the Middle East, Quilts of Valor spokesperson Sheila Simpson asked everyone to pray for soldiers in harm’s way, for the military and the country’s leaders. She thanked the quilters for their dedication in making quilts for veterans and the great work they continually do.

“Anyone out there who can sew, we would love for you to join us,” she said. “We can teach you to quilt. We meet here at sewingmachine.com on the first Saturday of the month. We welcome donations from anyone who supports what we do. At least $100 worth of fabric and batting goes into every quilt we give to a veteran.”

Norman Messer was in Vietnam with the U.S. Army in 1969-70. John Wilder was with the Army from 1960-80. He was awarded the Purple Heart after having been wounded in Vietnam.

Frank Lyons was with Army intelligence in the late 1950s. His older brother, World War II veteran John Lyons, previously received a Quilt of Valor. It’s thought that they are the first pair of brothers to have received quilts from the local chapter.

Quilts of Valor is a national foundation of people who make quilts to cover service members and veterans who have been touched by war. The quilts given by local chapters provide comfort, honor and gratitude for their sacrifices and service.

The organization was founded in 2003 by Catherine Roberts, whose son had been deployed in the Iraq War. Always feeling close to panic over her son being in a war zone, Mrs. Roberts had a dream one night of her son sitting on the side of a bed and struggling with his war demons. As the dream continued, she saw him wrapped in a quilt with his demeanor changed to one of hope and well-being.

That dream inspired her to organize a small quilting group and to make quilts for young men like her son. The first quilt was awarded to a soldier recovering from wounds at Walter Reed Hospital in Washington, D.C.

It took Roberts and her small group three years to make their first 100 quilts. As word began to spread about what they were doing, more quilting groups were organized. Eventually, Quilts of Valor had spread from coast to coast. In May 2014, the 100,000th qui

“That’s a lot,” Simpson said. “But there are so many veterans out there who should be honored this way. We’d like to reach as many World War II, Korean War and Vietnam War veterans that we can.”

Each quilt brings a three-part message: (1) to honor a veteran for their service to the U.S., (2) a means of saying “thank you for your service and (3) comfort.

“Throughout our history, young men have left home to fight in a war,” Simpson said. “Many brought with them a comfort quilt made by a family member. In some cases, it was all they had for warmth and something to remind them of home. We think that quilts still have an ability to offer both comfort and warmth, warmth brought on by the memories of home. When you experience dark memories or need the warmth of a hug, we hope you will wrap this quilt around you and experience both.”

Simpson said the quilts are meant to be used, not hung on a wall for put in a display case.

“On behalf of the Quilts of Valor and a grateful nation, with our deepest appreciation, we thank you for your service to the United States,” Simpson said. “You are most deserving of this recognition. Thank you, and most importantly, know that you are forever in our hearts.”