New venue for weddings and events planned for West Point 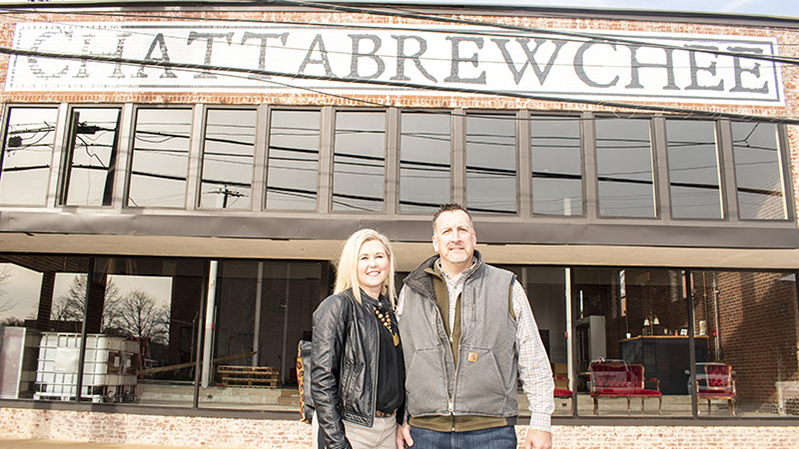 Downtown West Point might be just a few weeks away from having a venue capable from hosting everything from weddings, receptions, dad and daughter dances, lectures and outdoor parties with live bands in an area hugging the state line called the groove yard.

Michael Coniglio talked about their new venue, called The Burrow Warehouse, during Thursday’s West Point Rotary Club meeting. Coniglio and his wife Kesha closed on the building on New Year’s Eve, purchasing the former Chattabrewchee Southern Brewhouse building from Mike and Kathy Denehy.  They’ve been planning on having such a business for the past two years, and believe they have the perfect place for a new event center on West 4th Avenue. The Coniglios moved to West Point from LaGrange in 2013.

“We’ve wanted to find a need and build a local business to address it,” he said. “My wife is very creative, and we’d like to be more involved in the community.”

Mr. Coniglio has been the director of facilities for LaGrange College since 2011. He works for a company that manages college campuses throughout the country.

“My job is to manage college assets, including event managing on the campus where we do both college and non-college events,” he said.

Coniglio said he and Kesha once considered purchasing property and putting up a new building. They became intrigued when the Chattabrewchee building became available. They took an up-close look at the building and saw all kinds of possibilities. Word has gotten out about their plans for an event center.

“We are already getting inquiries about weddings,” Coniglio said. “We are looking for continual growth in the area. We think our new event center will pull in people from the entire region. We will have preferred vendor agreements in the local community. There will be a bar in the back where alcohol can be served. On the other side, there will be an area for a kitchen. Our target date to open is March.”

Additionally, the business will function as a prop rental space as well.

Coniglio said vintage props for photography sessions or corporate events would be available to rent, as well as traditional tables and chairs.

There will be some extensive building modifications in the coming weeks.

“The front area is pretty much the way we want it to be,” Coniglio said. “Everything will have an industrial feel with exposed brick and concrete floors. There will be big open spaces like a warehouse. We will resurrect the mezzanine area inside the building. We will have four different spaces — the main parlor, a cocktail lounge and reception area, an upstairs area and an outside area we’ll call the groove yard. That will be a place we can have live bands and street parties.”

Coniglio said the event center would be a very special place for weddings.

“It will be customizable,” he said. “We know that a bride-to-be wants something different than the last wedding. We will be able to change it up for them.”

A lecture hall area inside the building will be able to seat up to 200 people for major speaking events.

“We expect our busy periods will be on Friday and Saturday nights,” Coniglio said. “We are hoping it will spawn more retail business in West Point. We think it will draw people who are not normally here. We have a rough draft for pricing. We want it to be fluid, allowing people to rent different areas of the building.”

Coniglio said there’s competition out there for this type of business.

“We think this will have a different feel and that people will like it,” he said. “There’s a demand for something like this. We are excited about what we’re doing and we think we can partner with the city on quite a few events. We will sponsor events too.”

“We are hoping everything will be ready to go by March,” he said.