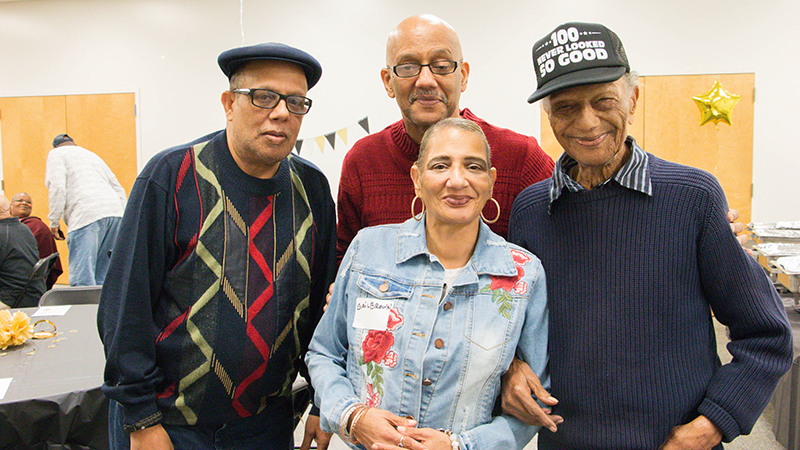 He may be 100 years old, but that didn’t stop him from celebrating Friday night.

Jenkins was born on Jan. 7, 1920, in Mountville, which is now called LaGrange.

Jenkins was promoted to Staff Sergeant and led a convoy of 50 men in the Red Ball Express. His convoy was a famed truck convoy system that supplied Allied forces moving quickly through Europe after breaking out from the D-Day beaches in Normandy in 1944.

He was in charge of 30 vehicles crossing Europe through France, Belgium, Luxemburg, Holland and eventually Germany.

“I was in there fighting, and saw front-line battle,” Jenkins said. “I learned a lot of things I would have never learned in the streets. The most memorable experience I had was when I was coming out of the army.”

The Red Ball Express preserved through rough terrain, unmarked road and took on enemy fire regularly. Jenkins said he was able to survive it all, even when he saw death constantly.

“I was directly on the frontline facing lots of gunfire,” Jenkins said.

Before leaving for the war, Jenkins married his late wife, Hazel Davis.

“My wife had our firstborn after I left for Germany,” Jenkins said.

After he came back from the war, Jenkins packed up his family and moved them to New York City.

“I stayed in New York for 65 years,” Jenkins said. “I worked at the Goodyear car dealership and came back to LaGrange about 15 or so years ago. It is quieter here.”

Jenkins and his wife had seven children during their marriage, Albert Jr., Elliot, Sandy, Jeffrey, Jerome, Glen and Gail.

“I’ve lived a very successful life,” Jenkins said. “I would tell young kids to do the right thing, raise a family up and go live 100 years.”

To this day, Jenkins said he is still traveling hundreds of miles every year to visit his wife’s grave in New York City.

“I still live on my own and keep to myself, but I like it that way,” Jenkins said.

Arrest made after two gallons of date rape drugs…