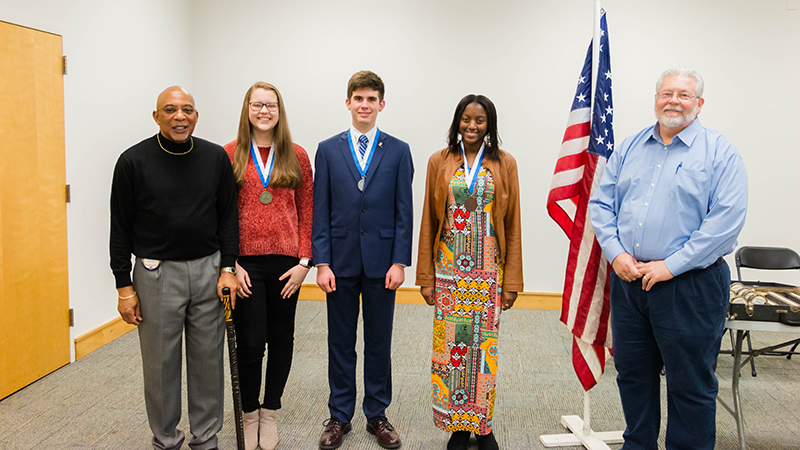 The three read aloud their essay that had the prompt “Optimism the Key to Achieving the Dreams you iMagine?”

She used inspiration from inventors like Thomas Edison and Steve Jobs to complete the 700-word submission.

“Thomas Edison once said, ‘You get imagination in a pile of junk,’” Criswell said. “Without the imaginations of inventors like Edison, there would not be the modern technology that we use in our everyday lives. Although Edison may have been referencing more than just a pile of junk, I believe he wanted to get the point across that anything can be used to create things. With communications are growing faster and easier to update technologies, thanks to visitors and great imaginations.”

Criswell wrote that the key to good communication has come from imagination and optimism.

“For example, the encouragement that social media gives its users that empower them to create strengths and achieve goals in which they have never imagined,” Criswell said. “Technology has allowed students to be able to use their imaginations to reach their goals. Also, people are now able to communicate their dreams and encourage others to use their imagination to achieve goals to say, exchanging ideas using technology. The way people are able to instantaneously send messages, pictures or videos allows them to strengthen and inspire people. They interact with over their devices, the power that phones, computers and other digital devices that increase communications. However, society today is great because today’s world is so connected. It is important that people are able to only send helpful messages to each other.”

“Walt Disney, a dreamer with a vivid imagination, an optimistic attitude for his dreams to come true turned a cartoon about a mouse into an empire with theme, parks movies and more,” Whitfield said. “Albert Einstein used optimism to get through being known as the ‘dopey one,’ and used that optimism to achieve his dreams and help society progress. He also stated that imagination stimulates progress and gives birth to evolution.”

“A person with good, positive vibes will always encourage others that it is important to be an optimist,” Johnson said. “Everybody has that characteristic of positive thinking…Every individual must make a decision to have a positive impact in their life to be successful. There is always an optimistic outlook on things if you have the ability and wisdom to acknowledge that any problem that arises can be turned into a positive parachute to learn.”

Johnson said the key to being optimistic is listening to your heart.

All three finalists were presented with a medallion for their achievement.