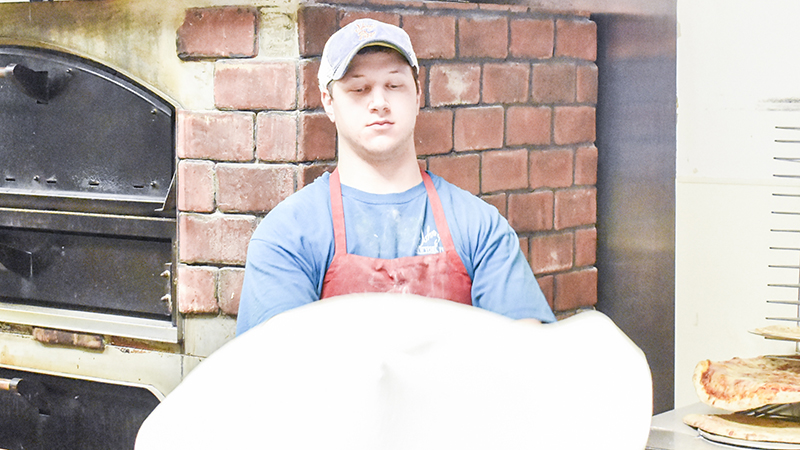 WEST POINT — When Ben Hamilton’s parents told him that his step-father was going to quit his job to open a restaurant in West Point, he thought they were crazy.

“It’s definitely been fun to see the growth I mean, not only in the business but in the community and see stuff come up around it,” Hamilton, who is now the owner of the restaurant, said.

When his parents first decided to open the chain pizza restaurant that serves New York style pizza, there was barely anything in the square. Alongside Johnny’s, the only other restaurant was Miso Sushi House. Since he grew up in West Point, he knew exactly how little there was in the town just 10 years ago, which is one of the reasons why he thought his parents were crazy.

“It was a ghost town. There were tumbleweeds almost every day,” Hamilton said. “There weren’t many people. You could drive through town and not see a car. Now you drive through town, and you can’t find a parking place. It’s definitely different and it’s fun to be a part of that.”

Ten years ago, Hamilton was a student at Auburn working at Johns Brusco’s, which is part of the Johnny’s Pizza chain. When his family decided on joining the Johnny’s family, Hamilton already had the training. Once he graduated, he became a manager at the store and bought the business from his parents eight years later.

The Johnny’s slogan is “your neighborhood pizzeria,” which has allowed Hamilton to be part of both the Chambers and Troop communities.

Johnny’s Pizza sponsors most of the schools in both communities, catering to most school’s concession stands for sporting events. Johnny’s hasn’t changed very much in the 10 years it has been open.

Some of the items on the menu have changed, but for the most part, the staff and clients have remained a constant.

There are four workers at Johnny’s that have been around longer than seven years. All of them are now managers but are still seen working. Hamilton works himself, usually cooking in the back. For about an hour or two, Hamilton’s mother, who is retired, comes to work as well.

When Hamilton bought the building in 2016, he was able to expand the business, adding a 50-seat banquet hall as well as being able to expand the outdoor patio from 20 to 45 seats. The growth has helped bring in more business. When they first started 10 years ago, Hamilton knew most of the people that walked through the door.

“I’d say over the last six years we went from knowing probably roughly 50% of the customer base to really only knowing about 25 percent of it. We’re keep reaching further and farther out,” Hamilton said.