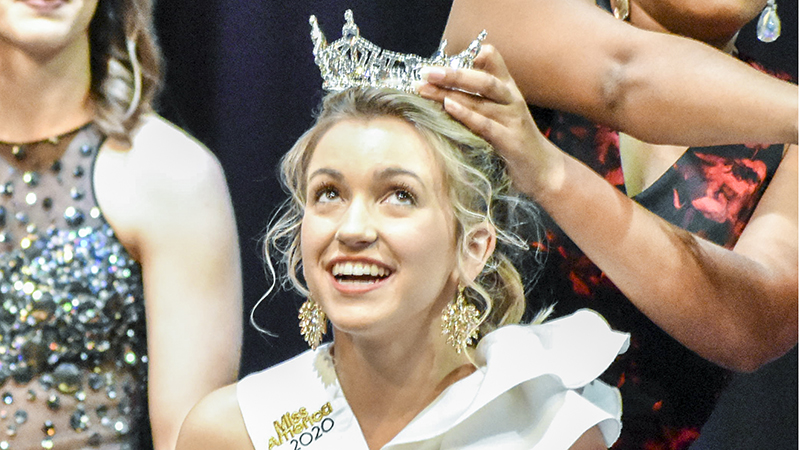 Three crowns were handed out Saturday at the Miss Troup County Scholarship Competition at the Troup High School auditorium.

Williams’ platform was centered around the dangers of children using social media and using the “like” button on different mediums.

“A lot of people see the like button as ‘how many people like what I’m doing, how many people are encouraging me throughout my day,’” she said. “We can encourage people that the like button means nothing and it means nothing to who you are and what you stand for. Because your influence is what you do throughout your day, and the people you touch every day — not through that social media platform.”

Williams also took home the Winston Whitlow overall talent award with a dance routine to “This Is Me” from The Greatest Showman Ensemble.

Her platform is called the Bridge the Gap Project, which is a pen pal program between elementary students and senior citizens.

“When I visited a nursing home, one of the seniors said ‘I can’t believe anybody would think of me to do this,’” Clark said. “Some of them said they hadn’t heard from their family in six months. That made me feel like what I was doing was making an impact on nursing homes and senior citizen’s lives.”

During the talent portion, she performed a Beethoven piece on the piano in her arrangement.

The first runner-up was Miranda Moore, who received a $300 scholarship. Her platform centered on getting more women involved in STEM programs. For her talent portion, she performed a science experiment, creating Elephant’s toothpaste, which is a foamy substance caused by the rapid decomposition of hydrogen peroxide using potassium iodide or yeast and warm water as a catalyst.

The second runner up was Sarah Stallings, who sang “I Know You Won’t” by Carrie Underwood. Her platform is Cutting the Bull, which is about combatting bullying and teen suicide. She received a $100 scholarship.

Singleton performed a tap dance routine to “Waterloo by Abba and announced her platform as Stand Up to Cancer.

During a question-and-answer period, she was asked about her favorite number.

“Throughout my life, I have always had a connection to the number three,” Singleton said.

She said she was the third child, born three months early and was three pounds when she was born.

“All these coincidences, it has really shown me that the number three has something to do with my life,” Singleton said.

Brianna Drake was named the first runner up in the teen competition. She performed a jazz dance to “Stuff Like That There,” originally performed by Bette Midler.

Her platform centered on autism.

The program was a preliminary competition to the Miss Georgia competition hosted in Columbus in June.