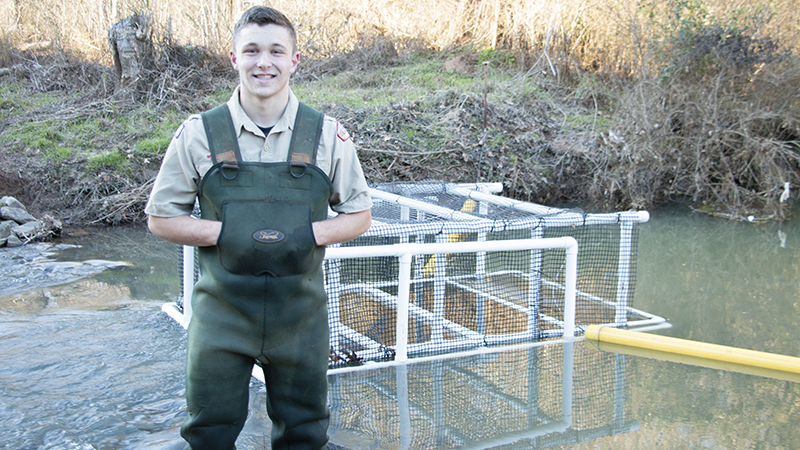 Will Bartlett stands in front of the trash trap he built and installed at Blue John Creek Tuesday afternoon. --Jenna Oden

One Troup County High School senior and local scout is leaving LaGrange better than he found it before leaving for college in May.

Seventeen-year-old Will Bartlett spent his Tuesday afternoon in a pair of duck waders, his scout uniform and up to his chest in freezing cold water installing a trash collection system he designed and made for Blue John Creek.

“I’ve been picking up trash since summer of 2018,” Bartlett said. “I realized the need to pick up trash then, and I also realized how dirty certain spots in LaGrange were. It’s awful for the environment.”

After talking with his Scout Master from Scout Troop #3, Mark Webb, they found that Blue John Creek would be one of the most effective places for a trash trap.

“I’ve done some research prior to trash traps, and I didn’t find any connected that were involved in scouting organizations,” Bartlett said.

This installation is Bartlett’s Eagle Scout project that will earn him his Eagle Scout Badge, the highest achievement or rank attainable in the Scouts BSA program of the Boy Scouts of America.

Bartlett’s trash trap was built to sit afloat on the water, stretch wide across the creek and have trash flow directly into it.

For the past few weeks, Bartlett has also been working with the City of LaGrange on the project.

“The city will come in approximately every two weeks to empty it,” Bartlett said.

“Once they see it is working right, especially during the summer, it won’t have to be as much.”

Before getting chest deep in the water, Bartlett, some of his fellow scouts, school mates and city staff spent a half hour picking up trash around the creek as well.

“It has been months of planning and working, and doing,” Bartlett said. “I am ecstatic. It has been a long time coming, and I am very excited to get this done.”

Bartlett said he thought about the installment for several days, and how they were going to be able to secure it.

“It turned out to be a lot easier than I had ever imagined,” Bartlett said. “Everything went basically according to plan.”

Over the next few weeks, Bartlett said he plans to go and tweak and check on  the trap to fix any problems that may come up with it.

Twelve Plus students work to repair holiday lights for…