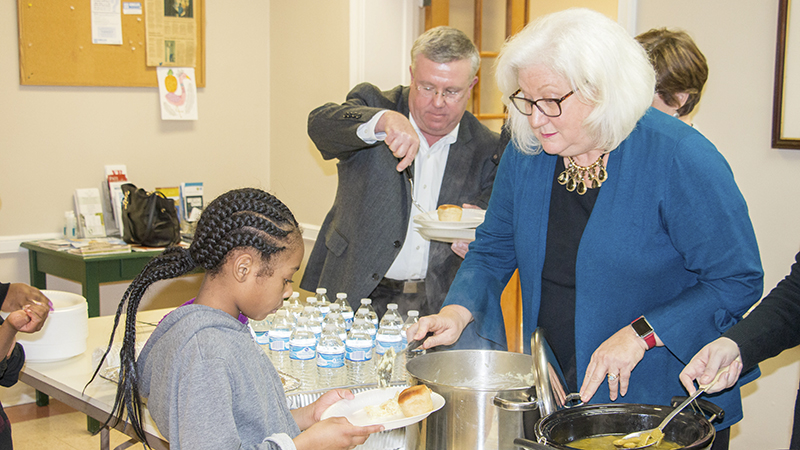 Volunteers and participants going through the 12-week course of Circles of Troup County had the opportunity to listen to Troup County Sheriff James Woodruff speak on Thursday night.

Circle of Troup County exists to identify and eliminate the causes of poverty and support those wishing to lift themselves out of poverty. The nationally recognized program uses a relational strategy to support both adults and their children moving out of poverty and works to inspire and equip the community to reduce its poverty rate.

“We have these weekly meetings for those going through a class,” said Sherri Brown, director of Circles. “The rest of this group for this class tonight is either new or have been around for a really long time, and they come to the weekly meeting to get education, support, goal setting and more.”

Taylor and Woodruff both made an emphasis that they’re main goal is to help the community not always punish.

“If we all get in here and do a little but to help them, it’s a great success,” Woodruff said. “Because when you get overwhelmed, you just want to give up and drop out.”

Circles is designed to help people in generational poverty move to self-sufficiency.

“That’s the great thing about Troup County,” Taylor said. “We’ve got Circles, we’ve got Safe Families for Children. We got all sorts of nonprofits that are funded by the community that are standing there with open arms so people don’t have to go Sheriff Woodruff’s route, [and be arrested] to avoid it [poverty].”

Woodruff said that the one thing that he hoped the group got from the night was that TCSO is “not the bad guys.”

“Sometimes we get called for crimes committed, and we have to act,” Woodruff said. “But I want women and men, mostly women, to know that if they get in a toxic relationship that they can call us, and there is a way out of it. We can help.”

He added that victims of domestic violence should never let their abuser manipulate them because TCSO can and will help them get out of the situation.

“I know this because I used to teach domestic violence in the police academy,” Woodruff said. “The abuser says, ‘alright go ahead and call the police because I am going to tell them you hit me, and they are going to put you in jail. And your little babies are going to be put in DFCS.’ They scare you into not reporting because you think you will go to jail. But you don’t.”

When the sheriff’s office is called on a domestic crime, they go as far as making a full circle and informing the child’s school as well through the Troup Cares Program.

“We are now notifying the school system the next day and letting them know to give a student a break if they fall asleep in class because they were most likely up all night dealing with the police,” Taylor said.“Or have them send them to the counselor’s office if they are showing a struggle with the issue. The teachers don’t have to know what went on, but they just know to be in touch.”

“My job is justice, and it’s not about prosecuting people because I don’t keep county of wins and losses,” Taylor said. “If I’ve got somebody that’s petty shoplifting because they’re poor, I am going to get them over here with Circles and get them some help. We want to teach them to live in a way where they don’t have to resort to shoplifting.”

According to the Circles website, once participants complete the program they are each matched with two to four middle class volunteers who commit to working with them to reach their goals. Participants are the “Circle Leaders” of this small group, the volunteers are “Allies.”

Meetings are every Thursday with dinner served from 5:30 to 6:15 p.m. and the meeting and  Circles Kids program from 6:15 to 7:45 p.m. at Troup Baptist Association.

According to Brown, it’s always casual dress and participants introduce themselves by first names only.